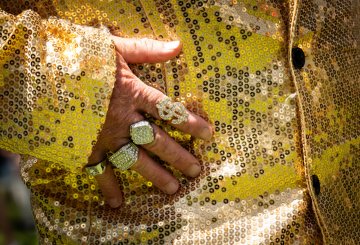 Update: The Presley divorce papers sold for £20,000 on 11 November to a phone bidder from the USA.

Forty years after the King’s death, the divorce papers of Elvis and Priscilla Presley are to be put on auction. The documents going under the hammer tomorrow at Henry Aldridge & Son in Wiltshire include multiple original signatures and details of their divorce settlement.

Elvis, 24, met Priscilla in Germany in September 1959 when she was the tender age of 14. Priscilla moved to Graceland in 1963 and, after years of courtship, they finally married in 1967 in Las Vegas. The next year, they had a baby girl who they called Lisa Marie—the Presleys’ only child together.

In her interview with Stellar, Priscilla recounts how Elvis was clear that he didn’t want a Hollywood wife or a career woman so she remained at home while he went rock and rolling. She comments that Elvis behaved in a controlling fashion throughout their relationship, dictating how she dressed and how she did her hair and make-up:

“He felt he could mould me, somewhat, into his perfect idea of a woman.”

Eventually, after bearing Elvis’ many infidelities and beginning her own affair with her karate instructor, Priscilla decided to leave. The couple parted ways in February 1972 and Priscilla filed for legal separation in July of that year. Concerned that the separation would make her home address visible on public records, and therefore put Priscilla and Lisa Marie’s security in danger, Elvis filed for divorce in January 1972. The divorce was amicable- the pair notably left the court room holding hands- and they stayed in close contact until the legend’s death in 1977.

The Wiltshire auction house Henry Aldridge & Son will be offering the divorce papers up tomorrow, on sale from an American collector. The documents contain three rare Elvis signatures: two of his full name, Elvis Aaron Presley, and one of his intials E.A.P. Priscilla herself signed the papers four times. The documents are dated 15 August 1972 and provide this description of the breakdown of their marriage:

Enumerating some of the Presley’s assets at this point, the auctioneer, Andrew Aldridge, explained:

“Each of the 12 pages contains fascinating details and offers the reader a snapshot into the details involved between both parties that only legal documents can give”.

The documents reveal the divorce settlement, setting out that a $100,000 sum was to be paid to Priscilla in two instalments: $50,000 within five days of the agreement and $50,000 on or before 20 August 1973. In addition to this, Priscilla was to receive a Mercedes Benz, a Cadillac, a 1971 Harley Davidson and half of the income from their luxurious residences in Beverly Hills, Los Angeles and Palm Springs.

In 2017, the 40th anniversary of Elvis’ death, his legacy lives on in the huge tourism and merchandise empire that Priscilla created. Elvis’ estate was riddled with debt when Priscilla became co-executor on behalf of Lisa Marie in 1979. Now, this business empire is worth approximately $380 million (more than Elvis during his lifetime) and Graceland is the second most visited home in the US after the White House.

After divorcing age 28, Priscilla, embarked upon a 22-year relationship with film producer Marco Garibaldi with whom she had a son called Navarone. Now single and aged 72, she concentrates her efforts on her grandchildren: Lisa Marie’s Riley, 28, Benjamin, 24 and 9-year-old twins Harper and Finley.

The Presley divorce papers are expected to fetch between an amazing £20,000 and £25,000, alongside a small thank you note from Albert Einstein. “A fabulous piece of show business history” and an artefact from one of the most important moments in Elvis’ life, these divorce papers will be gold dust for collectors and Elvis enthusiasts.

Divorce is in your DNA, new research finds
This site uses cookies. Find out more. Continued use of this site is deemed as consent.   CLOSE ✖