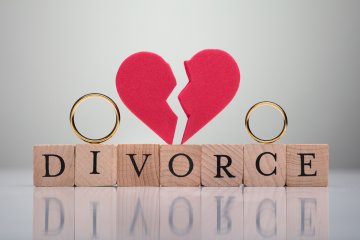 On 18 October, the Office for National Statistics released their report on the facts and figures about divorce in England and Wales in 2016. The data shows that, for the first time in five years, divorce rates have risen again. The study also covers same-sex divorce, revealing that lesbian couples are 2.5 times more likely to untie the knot than male same-sex couples.

The data is useful in revealing a multitude of facts about divorce trends in England and Wales, recording the age and sexuality of the petitioners and the reason for the petition, on top of the more general number crunches. The figures include annulments (where marriage was not legally valid in the first place) as well as divorce, but do not chart couples who separate without divorcing. Divorces relating to marriages which were officiated abroad are included, on the condition that the marriage was legally recognised in the UK and the couple’s permanent home was in England or Wales.

The ONS statistics show that in 2016 the number of divorces in England and Wales rose for the first time since 2009. Among opposite-sex couples alone there were 106,959 divorces- equating to 8.9 divorces per 1,000 married pairs. This is a 5.8 percent increase in the number of opposite-sex couples divorcing since 2015, which is the largest percentage difference since 1985 when there was a 10.9 percent jump. This significant rise in divorce in 2016 is a surprising statistic considering that the divorce rate dropped 9.1 percent in 2015. Regarding this change in divorce rates, the statisticians were eager to stress that this is a blip in an otherwise downward trend. Nicola Haines, the spokeswoman for ONS commented:

"Although the number of divorces of opposite-sex couples in England and Wales increased by 5.8 percent in 2016 compared with 2015, the number remains 30 percent lower than the most recent peak in 2003."

Looking at the reasons for the divorce, 51 percent of women and 36 percent of men cited ‘unreasonable behaviour’ to prove the irretrievable breakdown of marriage. This has consistently been the most common justification for wives since the late 1970s, before which it was named ‘cruelty’. For husbands, ‘unreasonable behaviour’ has been the most common reason cited for divorce only since 2006 as adultery and separation were mostly named before.

The data reveals that, as has long been the case, women are overwhelmingly the ones to initiate proceedings in opposite-sex marriages, with the percentage at 61 for 2016. However, men are increasingly more likely to petition first, as has been the trend since 1992 when the proportion of divorces granted to men was just 27.7 percent.

Concerning the age of the petitioners, the divorce rate is highest among men aged 45 to 49 and women in their thirties. This may reflect the fact that it is still not unusual for women to marry men older than themselves. This year’s statistics also revealed that ‘grey divorce’ is becoming increasingly common with couples in their fifties deciding to go separate ways: more than 13,000 women aged 55 and over divorced, and 19,454 men.

The data for same-sex divorce was accounted for separately since gay marriage only became legal in the UK in March 2014 and 2016 is therefore only the second year of figures available. These couples were able to convert their civil partnership into a marriage since December 2014, with the duration of the marriage backdated to beginning of civil partnership.

In 2016 there was a five-fold increase in same-sex couples divorcing from the previous year- the 22 divorces of 2015 became 112 last year. Alarmingly, 78 percent of all these divorces were lesbian couples, accounting for 87 divorces in contrast to the 22 between male gay couples. This may in part be explained by the fact that more lesbian couples have tied the knot than gay male couples: 56 percent of the same-sex marriages in 2014 were female couples.

‘Unreasonable behaviour’ played a much stronger part in divorce petitions between same-sex couples than opposite-sex couples, with it being cited for 96 percent of male divorces and 83 of female.

Does it all add up?

To conclude the findings, the national divorce rate sits at 42 percent and, despite the recent flood of divorces, the median duration of opposite-sex marriage in 2016 was 12 years. This is in fact an increase from 11.9 in 2015, and the second highest on record.

Results like this are a helpful commentary on the state of society’s perspective on ‘together forever’. After the Divorce Reform Act of 1969 came into effect in 1971, attitudes towards divorce started shifting seismically. Today, the image of the nuclear family is no longer the norm and many couples are choosing to cohabit for a long time before marrying, if they marry at all.

Diagnosing the reason for an increase in divorce in 2016, Chris Sherwood from the charity Relate commented that rising levels of household debt and stagnating wages could be putting undue pressure on marriages. He emphasised that, were couples better supported, the stresses of modern life may not have been the dividing factor:

"Divorce is not something that people tend to take lightly but our research suggests that many people could have saved their marriage and avoided divorce with the right support.”

With a growing number of couples struggling to divide bread-winning with home-making, combined with increased life expectancy and independence, this rise in divorce could be the start of a new statistical trend. However, as the marriage rate diminishes, it is likely that at some point the figures will reflect that those who chose to marry do so only after careful consideration and calculation, and the rates for divorce will continue on their downward trajectory.

Germany's first same-sex couple marry in Berlin district famed for gay rights activism
This site uses cookies. Find out more. Continued use of this site is deemed as consent.   CLOSE ✖