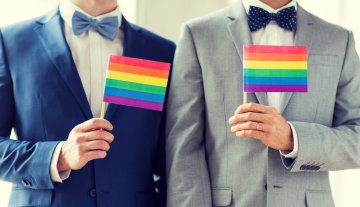 Last Sunday, the first marriages between same-sex couples took place in Germany after decades of gay rights demonstrations. After same-sex marriage was legalised in June, many couples scheduled their union for the first day that the law came into force.

Chancellor Angela Merkel has long been opposed to same-sex marriage but, with the national elections fast approaching, she called a free vote in Parliament in June. Despite claiming that she thought homosexual relationships were “just as valuable” as heterosexual, she and 225 other lawmakers voted against gay marriage. The bill however passed through without a struggle as 395 lawmakers voted in favour of marriage equality. This makes Germany the 14th country in Europe to legalise same-sex marriage and the 23rd country in the world. Despite being rather behind the curve for same-sex marriage, civil partnerships have been legal in Germany since 2001 and, in 2015 alone, 43,000 couples registered.

The law finally came into effect on Sunday 1st October 2017. In celebration of this fact, town halls across much of Germany opened as a one-off to welcome in the couples who wanted to register their marriage on such an historic day. The first wedding took place in the Schöneberg district in Berlin, an area known as the centre of the city’s gay scene after it held the world’s first gay demonstration in 1922. Karl Kreile and his partner of 38 years, Bodo Mende, were the first couple to tie the knot, walking the aisle of Schöneberg’s town hall to the traditional “Wedding March” by Mendelssohn. Kreile, 59, said that it was an “incredible honour” to be the first same-sex couple to marry in Germany after he and Mende, 60, had been turned away from a registry office 25 years ago. Their cake had the LGBT+ rainbow flag blazoned over it with the words ‘Ehe für alle’ (Marriage for All).

The head of the Berlin branch of Germany’s lesbian and gay association LSVD, Joerg Steinert, commented that “this day sends a significant signal, which is that the state’s discrimination of lesbians and gays is finished”. Same-sex couples will now be able to enjoy the same rights as heterosexual married couples: equal tax and inheritance rights, the right to determine end-of-life care for a partner and the right to adopt. However, some inequalities currently persist, for instance women are not automatically recognised as the mother of a lesbian partner’s child.

Considering the loud support for gay marriage and the mass of couples who have registered for civil partnerships, it is likely that many will now be looking to marry or convert to marriage over the coming months. Only one small problem remains: Germany may have progressed socially, but the software which registers marriages still does not allow for two entries of the same sex.

Indian Supreme Court decides Hindu couples no longer have to wait 6 months to divorce
This site uses cookies. Find out more. Continued use of this site is deemed as consent.   CLOSE ✖