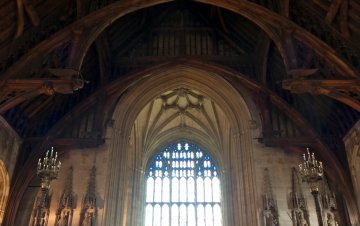 “A nation is only as strong as the families that create it”. Standing in a room behind the watchful eyes of the angels and gargoyles of Westminster Hall, Suella Fernandes MP gave a rousing opening presentation on the urgent need to rehaul our family law system. Gathered before the Chair Rt Hon Joan Ryan MP, sat nearly twenty MPs and a clutch of spectators, including Vardags’ very own press office and Managing Director Catherine Thomas.

Since the inception of Vardags in 2005, our founder and president Ayesha Vardag has been vocal in her support of no-fault divorce, co-parenting, prenups and de-clogging the family courts. It was these very issues, and more, which the MP for Fareham, Suella Fernandes, brought to Parliament to discuss on Wednesday 15th November. Struck by Ayesha’s own initiative to bring change, the Campaign for Family Law Reform, Fernandes urged MPs to give their thoughts with the motion This House has considered family justice reform.

With the aim of sparking a constructive debate on the future of family law, the former barrister appealed to her fellow MPs to consider a tripartite “bedrock of reform”: the need to strengthen the wellbeing of families, create a fairer divorce process and a more transparent justice system. Her own propositions included the introduction of a rebuttable presumption of shared parenting, proper enforcement of child arrangement orders, due respect to prenuptial agreements, responsible reporting and better rights for cohabiting couples.

A key focus of Fernandes’ call for reform was our antiquated divorce laws. Echoing Ayesha Vardag’s own rallying cry, the MP unequivocally declared:

“It is time for no-fault divorce”.

In her recognition of those shouting the loudest about the need to introduce this legislation, Fernandes credited Vardags itself alongside Baroness Hale, Sir Paul Coleridge and the Family Law Bar Association. Citing the headline-grabbing defended divorce case Owens v Owens, she explained how our current laws create acrimony and push parties onto a “needlessly confrontational path”. This not only creates a hostile environment for any children involved but inflates costs and prolongs litigation. In the most serious of cases, it can exacerbate domestic abuse. Fernandes stated:

Fault-based divorce increases the cost for both the state and the litigants. The need for judicial scrutiny of those 120,000 applicants per year places a significant burden on the courts; a streamlined process would save time and money. As Baroness Hale has made clear, this is not about quickie divorces, but about removing the fallacy of fault. A 12-month cooling-off period would enable that balance to be struck.

The concept of no-fault divorce should be looked at and implemented, as the current law effectively forces spouses to throw mud at each other, when the truth is probably that the marriage has just come to an end. Cost is another issue that adds to the worry, as many people who are separating will already face financial difficulties and challenges.

Labour’s Ian Lucas, MP for Wrexham, also "strongly agree(d)" with Fernandes on the issue of divorce law reform, stating that in a parliament characterised by a “lack of political consensus the likes of which we have never seen before, this is the kind of area on which we can work together.”

The scope of Fernandes’ speech was wide, but the MPs, eager to address family matters in their own constituencies, threw the net wider still. Jim Shannon, MP for Strangford, spoke passionately about the need for rights for grandparents caring for children, and for cohabiting couples in Northern Ireland and beyond. “Families exist in many different forms,” he acknowledged, “the law must be fluid and capable of changing to best meet their needs”. He blamed the prevailing myth of the common law spouse for much of the misinformation about protections for cohabitants- an illusion which Vardags is particularly keen to dispel.

For all the aspirations to create a family law system which is both efficient and empathetic, Ian Lucas argued that the Conservative government’s decision to cut legal aid undermines progress. He valiantly made the point that the discourse around improving the “hideously complex” system should begin at access to justice. For him, it is undeniable that divorce laws are “completely out of date”, but the real issue at hand is that many miserable couples simply can’t afford the help necessary to navigate the system.

In response to Lucas’ case, the MP for Wells, James Heappey, suggested that access to courts should be adjustable so as to ward off those who wish to use the system “vexatiously” against their ex-partners -costing them time, money and emotional trauma by needlessly prolonging litigation. John Howell MP of Henley however advocated bypassing the courts entirely to resolve tensions. He spoke about the benefits of mediation, a cause that Vardags has long supported, detailing how it saves parties considerable time and money and is the best way of negotiating a stable solution in a time of emotional volatility.

Reflecting on the issues cited by MPs below the border, the Scottish contingent -John Lamont for Berwickshire, Roxburgh and Selwick, and Angela Crawley for Lanark and Hamilton East- suggested that England and Wales could look northward for alternative solutions to common concerns. Scotland introduced no-fault divorce in 2006 and, while Mr Lamont was keen to stress that the country’s family justice system should not be put “on a pedestal”, he acknowledged that it was an “obvious place to start” when it comes to looking at models for reform.

The final speaker before the round-up, Yasmin Qureshi, endorsed greater transparency in the family courts and voiced her concern that too many children are being taken away from their parents. For Qureshi, the government has a responsibility to provide better support and resources to struggling parents before the situation deteriorates to this extent. She also criticised the Child Maintenance Service for their ineffectiveness, a failing which Vardags director Emma Gill has also denounced.

The MP summing up the debate was Dr Phillip Lee, Parliamentary Under-Secretary of State for Justice. He acknowledged the gravity of the situation but also offered some insight into why the family courts function as they do, burdened with a multitude of restrictions and competing concerns. Dr Lee agreed that the system needs to be demystified but there is a need to “ensure the right balance is struck between transparency and privacy”.

However, the most encouraging episode in Dr Lee’s speech and, indeed, the entire session, was when Lucas MP interjected “Who disagrees with the approach to changing the law on no-fault divorce?” and Dr Lee replied “I do not know the answer to his question”. With the path, then, seemingly open, this debate was an incontestably positive start to the parliamentary campaign for no-fault divorce championed by Ayesha Vardag.

To close this engaging and emotive debate, Fernandes professed that she has “nothing but gratitude” for all those who contributed to the much-needed discussion and the session ended with a resounding affirmation: “The Ayes have it”.

"This was a crucial and encouraging debate. Politicians on all sides and from across the country have backed our call for no-fault divorce. The Campaign for Family Law Reform, supported by Vardags, will now look to work with those who spoke at the debate to push for the necessary legislative change."

To view our live coverage from the event, please click here.

Where the state pays for legal representation. Generally not available for family law, unless there are allegations of domestic violence.

An agreement that spouses enter into prior to getting married, which details terms for how their marital assets will be split in the event of a divorce.

A term commonly used to refer to the pronouncment of decree nisi, which only takes a few seconds in court. This is entirely separate to resolving the finances, which may take much longer.
“Ayesha Vardag - Britain’s top divorce lawyer.”

Vardags steam ahead in this year’s Legal 500
This site uses cookies. Find out more. Continued use of this site is deemed as consent.   CLOSE ✖