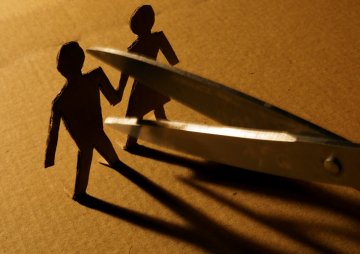 A major study has found that divorce law in English and Wales can "exacerbate unnecessary conflict with damaging consequences for children" and runs "contrary to the thrust of family law policy."

Finding fault? Divorce law and practice in England and Wales, published last Monday, reaffirms the arguments put forth by supporters of no-fault divorce: that the current law encourages acrimony and denies parting couples the opportunity to split amicably. Such an approach, campaigners argue, is anachronistic; it stands in opposition both to the realities of modern society and an increasingly problem-solving based justice system.

Professor Liz Trinder led the study, which was funded by the Nuffield Foundation, at the University of Exeter. Researchers conducted focus groups with family lawyers, interviewed 110 people going through divorce, and spoke to 16 legal advisers and judges to build a picture of professional and public perception of the present system.

There is only one ground for divorce in England and Wales: irretrievable breakdown of the marriage. Yet petitioners are required to evidence this using one of five ’facts’ in order to be granted a divorce. These are: behaviour which makes it unreasonable to expect the petitioner to live with the respondent, adultery, desertion, two years separation with consent of the respondent, or five years separation without it. Only the latter two facts do not require the petitioner to ascribe fault to their spouse, yet the researchers found that these options also pose significant difficulties for families. According to lawyers and petitioners interviewed for the study, it was "not often economically or emotionally possible to wait for two years...to sort out family finances or to keep children in limbo".

While citing unreasonable behaviour was found to be "generally the best vehicle for achieving speed and certainty", this necessitates the attribution of blame. In the study’s national public opinion survey of 1336 divorcees, 62% of petitioners and 78% of respondents said that "using fault had made the process more bitter".

A close look at fault-based divorce

Divorcees interviewed in person for the study provided accounts of the negative impact of fault, which included the "fuelling litigation over children." Some parents reported threats to show their children the divorce petition. Respondents also described finding a litany of allegations laid bare in a legal document "inherently upsetting", even when they understood that the petitioner cited a fault-based fact merely as a "means to an end"; i.e. to procure a swift divorce.

This brings us to another flaw in fault-based divorce. Aside from the fact that this approach invites increased acrimony, according to the research, divorce petitions do not, at any rate, accurately reflect why the marriage broke down. While it is not made clear how may of the divorcees surveyed were respondents to a fault-based petition, just 29% of this subset said that the fact used "very closely matched the reason for the separation."

Per the Matrimonial Causes Act 1973, the family court "must inquire, as far as it reasonably can into the facts alleged" by parties to a divorce. Yet the study found that, in practice, the scrutiny paid to a petition is "primarily an administrative process", rather than "a judicial inquiry into the truth". This results in the petitioner%27s allegations essentially being taken at face value, save for the rare cases in which the respondent defends the divorce. As a respondent interviewed by the researchers put it:

Not only can this seem terribly unfair to the respondent, it also renders the fault-finding exercise somewhat futile. Legal advisers and judges interviewed for the study demonstrated a "pragmatic stance"—the court’s role was to "try to facilitate the divorce", rather than intervene in "inherently non-justiciable issues about who was to blame".

Some proponents of fault-based divorce may argue that the process should be difficult. After all, marriage is a life-long commitment and perhaps the placement of hurdles on the road to divorce lead some couples reconsider their decision. Yet the study did not find any empirical evidence in support of this. On the contrary, upon analysis of 300 undefended court files, fault was "associated with shorter marriages." Further, it is not a unreasonable assumption that the increased conflict caused by fault-based divorce minimises any hypothetical possibility of reconciliation further down the line.

The summary report of the study identifies "two different and mutually exclusive moralities in relation to divorce: a traditional one based on ideas about individual justice for the petitioner, and a responsibility morality based on the ‘good divorce’ where the focus is on harm-minimisation". Yet, as we have seen, current divorce law does not satisfy either group. Though those with a justice-based viewpoint would see a more stringent inquiry into fault, for most of the interviewees "the removal of fault was strongly preferred".

Four options for next steps were considered, ranging from no change, to a notification system whereby one or both parties submit notification of their intention to divorce without apportioning blame. A comprehensive evaluation of their various advantages and limitations can be found here, but ultimately notification divorce came out on top for the researchers. This approach, they concluded, is fair, simple and cost-effective, and would bring England and Wales in line with many European and North American jurisdictions.

Most significantly, though, it would eliminate both the acrimony and dishonesty derived from fault-finding. Moving to a no-fault notification system would demand a drastic overhaul of current divorce law and require primary legislation. However, with the main piece of divorce legislation in England and Wales almost half a century old, perhaps such reform is long overdue.

"This study shows that we already have something tantamount to immediate unilateral divorce ‘on demand’, but masked by an often painful, and sometimes destructive, legal ritual with no obvious benefits for the parties or the state. A clearer and more honest approach, that would also be fairer, more child-centred and cost-effective, would be to reform the law to remove fault entirely"

You can read the full report here.

Involves one spouse having sexual intercourse with a person who is not their spouse. A ground for divorce. Also known as: having an affair.

When the respondent disagrees with the petitioner’s divorce petition.

The abandonment of one spouse; a ground for divorce in certain circumstances.

Manchester Office nominated for 'Best Boutique Law Firm' at The Talk of Manchester Business Awards
This site uses cookies. Find out more. Continued use of this site is deemed as consent.   CLOSE ✖