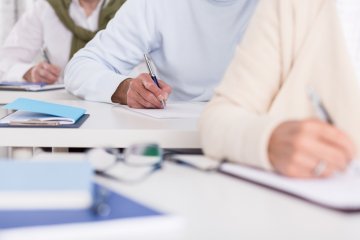 A court in south-west China have denied a woman’s divorce application after she and her husband scored highly on an examination designed to evaluate marital problems.

The written test was introduced at the Sichuan Yibin People’s Court as a means of ascertaining whether a marriage is beyond repair by quizzing prospective divorcees on different aspects of their marriage. Some questions are straight-forward, with ’candidates’ grilled their spouse’s favourite food and anniversary dates. Others demand deeper self-reflection. For instance, participants are asked to recall the happiest moments of their relationship and explain what marriage and family means to them.

Magistrate Wang Shiyu, who proposed the test, argues that in comparison to a standard divorce application, it offers a "fairer metric, as evidence presented by the plaintiff can sometimes be biased."

One of the first couples to take the relationship exam passed with flying colours, with the wife scoring 86 points out of a possible 100 and the husband scoring 80. Had they gained 60 points or less, the court would have considered their marriage to be "at risk".

Reviewing their responses, Magistrate Wang acknowledged that the husband had shown a "lack of responsibility to the family" and appeared to be "addicted to gambling and rude to his spouse". However, he stated that the results of the exam suggest that the couple are still in love and he refused the wife’s application. The husband had allegedly been unwilling to divorce in the first place, and was seeking a second chance, having promised to quit gambling. The wife has reportedly accepted the judge’s decision, and neither party plan to appeal against it.

It’s true that, on an individual level, taking time out to write down your thoughts and feelings can be hugely beneficial when an event as momentous and life-changing as divorce is looming. Whether this prompts the realisation that perhaps the marriage is not beyond salvation, or strengthens one’s resolve to split, the simple act of putting pen to paper and looking back on the relationship can be therapeutic—a recent study has even identified a link between narrative expressive writing and improved cardiovascular health in divorcees.

That said, it is surely up to the parties to the marriage to choose the outcome that is right for them, rather than a judge. Further, the notion that answers which revolve around the test taker’s subjective emotional experiences can be evaluated numerically is, frankly, absurd. Indeed, the fact that they are scored at all could negate any potential therapeutic benefits, leaving the test taker feeling vulnerable and judged. A relationship test could be a useful mediation exercise, though a relationship therapist attuned to the emotional needs of the participants would be far better placed to oversee this than a magistrate.

In any case, setting aside the fact that couples determined to divorce could simply lie to score poorly on the test, it is troubling that courts can deny adults the autonomy to make their own decisions regarding their relationship. Unlike in England and Wales, it is in fact possible to obtain a no-fault divorce in China, meaning that parting couples do not have attribute blame when seeking a divorce and giving the parties far more control over their own futures.

However, if one party contests the divorce, judicial mediation is required. Speaking to The New Yorker in regards to Chinese divorce law, Shanghai lawyer Grace Gui, explained that the courts tend to be socially conservative, with judges often refusing a divorce application the first time round, giving couples the chance the to reconcile before they are eligible to refile. Whether this has any effect, other than to keep couples in an unhappy limbo is questionable, though China%27s divorce rate continues to rise.

Such stuff as dreams are made on: a look back at Le Tour de Vardags
This site uses cookies. Find out more. Continued use of this site is deemed as consent.   CLOSE ✖