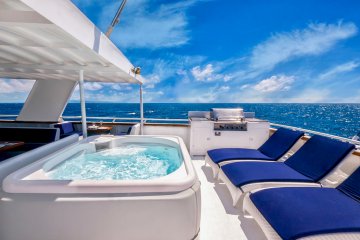 The Russian mega couple, Roman Abramovich and his wife Dasha Zhukova have announced that they are parting ways amicably after their 10-year marriage.

The owner of Chelsea FC, 50, and business woman Ms Zhukova, 36, met at a dinner party in 2005 when Mr Abramovich was still with his second wife, Irina. The pair married secretly in 2008 and have always kept their relationship incredibly private. They have two children together named Aaron and Leah.

This week, the couple published a joint statement where they expressed their wish to separate in the kindest way possible. They explained that they have made the “difficult decision” to separate but that they will “remain close friends, parents and partners in the projects we developed together”. There is a strong focus on co-parenting and also co-working as they founded together the Garage Museum of Contemporary Art in Moscow and the New Holland Island cultural centre in Saint Petersburg.

Mr Abramovich, orphaned as a young boy, made his billions by capitalising on the privatisation following the fall of the Soviet Union in the 1990s. His money has largely come from the steel, mining, real estate, and telecommunications industries. This year, Forbes estimated his wealth to be £7 billion, making him the 139th richest person in the world. Among other extravagant assets, Mr Abramovich owns Eclipse- the second largest luxury yacht in the world (£1.5 billion), a private Boeing 767 (£57 million), a home in London’s Kensington Palace Gardens (£125 million), a mansion in the South of France (£30 million), another in New York’s Upper East Side (£60 million) and an extensive collection of supercars. Even the pet dog costs £950. Ms Zhukova herself is the daughter of a billionaire oil trader and has created her own fortune from her career as a gallery director, fashion designer, art collector and connoisseuse. Mr Abramovich in fact gave Ms Zhukova her own masterpieces as gifts over the course of their marriage, including Lucian Freud’s ‘Benefits Supervisor Sleeping’ for £17 million, Francis Bacon’s ‘Triptych (1976)’ for £43 million, a $14 million sculpture by Giacometti and a group of 40 paintings by Ilya Kabakov at the rate of $30-60 million each.

As both Mr Abramovich and Ms Zhukova have amassed huge wealth, the divorce settlement has the potential to be record-breaking. However, this will depend firstly on whether the couple have signed a prenuptial agreement and secondly on whether the divorce proceeds in Russia or England. If a prenuptial, or indeed postnuptial, agreement exists, this will hold decisive weight in the judge’s final decision. The agreement will determine who gets what and vastly simplify the financial proceedings however it will only be held firmly to its terms in Russia. In the UK, prenuptial agreements have only been legally enforceable since 2010, after the landmark Supreme Court case of Radmacher v Granatino. Currently in the courts of England and Wales, prenuptial agreements are considered to have “magnetic importance” but their terms will not be upheld if deemed unfair. If there is no nuptial agreement, or if it is not comprehensive, the courts will have to decide on an appropriate settlement themselves. This is where Russia and England differ hugely. The Russian courts will probably only count Abramovich’s Russian assets, ignoring his properties and accounts elsewhere, and they very rarely order spousal maintenance. Since the UK courts have a reputation for fairness, Ms Zhukova is likely to be awarded a much larger proportion of the marital fortune here than in Russia.

In 2007, Mr Abramovich divorced his second wife, Irina Vyacheslavovna Malandina, in Russia. Because of this, the Aeroflot flight attendant was awarded a small fraction of the couple’s fortune, $300 million, even after 16 years of marriage and five children. The billionaire was married to his first wife, Olga Yurevna Lysova for three years before they divorced in 1990. A brief marriage with no children, little is known about the details of the divorce. It is possible that Ms Zhukova’s divorce will play out in a similar way to Ms Malandina’s if it is decided that Russia is the right jurisdiction.

However, as is increasingly the case in ultra high net worth divorce, it is likely that Mr Abramovich and Ms Zhukova will choose to avoid the courts altogether. Opting for private arbitration, we can expect that the couple’s divorce settlement will be a private matter, like much of their relationship, outside the view of the paparazzi. This choice, alongside their decision to part ways amicably, is the best way to retain a sense of normality for their children, however far from normal this luxury lifestyle may seem.

The court must have ‘jurisdiction’ in order to hear a case. Jurisdiction is a complex legal principle, but will largely depend on the parties links to a particular country.
“Ayesha Vardag - Britain’s top divorce lawyer.”

Romania’s marital prison: a medieval method for relationship therapy
This site uses cookies. Find out more. Continued use of this site is deemed as consent.   CLOSE ✖