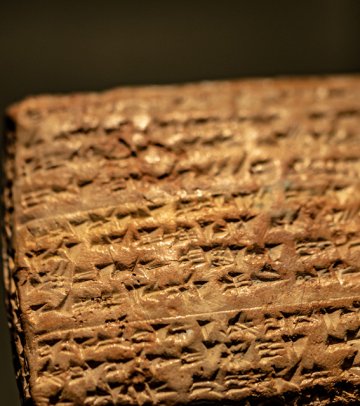 A group of researchers based at Harran University in Turkey have examined a 4000 year old Assyrian tablet comprising an ancient marriage contract.

Assyrian marriage contracts are the earliest known prenuptial agreements in the world. The researchers believe that tablet, which was discovered at the UNESCO World Heritage site of Kültepe-Kaneshe in central Turkey, makes the first known reference to infertility.

The contract between the couple Laqipum and Hatala was carved onto the clay in cuneiform script, one of the earliest forms of writing. Their marriage contract stipulates that if the couple cannot produce a child within the first two years of marriage, they will appoint a female slave as a surrogate. The woman, known as a hierodule, would be freed from slavery after the birth of a son.

The ancient contract also had provisions to guard against polygamy and divorce, specifying that Laqipum may not take another wife and that if either of them chose to divorce the other, they would have to pay over five minas of silver.

There is evidence that crude surrogacy arrangements were widespread in ancient Mesopotamia and Egypt.

Sexual slavery in the ancient world

The custom of wives offering female slaves known to their husbands to have their children was described in contemporaneous legal writings as well as the Old Testament.

The biblical Jacob and his wife Rachel were one such Sumer-Mesopotamian couple, who in 1800BC, made Rachel’s ’handmaid’ Bilhah have a child by Jacob.

The Code of Hammurabi was a code of law given down by King Hammurabi in 1754 BC in Babylon, the most famous city in ancient Mesopotamia, modern day Iraq. The legal code makes several specific provisions relating to these ’handmaids’ all of which emphasise property rights and the handmaid’s slave status.

The provisions specify that a handmaid who hasn’t conceived can be sold on as a slave. Once she has had a man’s children however, he can’t sell her as her status has risen, though he might keep her on as a slave. The law also specifies that should a debtor try to sell his handmaid, the money would be repaid and she freed. The Babylonian legal strictures also hold that a man who has had children with a handmaid offered by his first wife cannot take a second wife.

Handmaids and abuse in Genesis

The custom of wives offering handmaids to their husbands to have their children was described in Genesis. The first handmaid described in the bible was Hagar, a young Egyptian woman kept as a slave by Abraham’s wife Sarah. Hagar gave birth to Abraham’s son Ishmael and was later cast out with him after the elderly Sarah’s miraculous pregnancy.

Abraham’s grandson Jacob became known as the patriarch of the twelve tribes of Israel, fathering a dozen sons. Married to Rachel and Leah, Jacob had children by Bilhah and Zilphah, their respective handmaids:

“And she said, Behold my maid Bilhah, go in unto her; and she shall bear upon my knees, that I may also have children by her” (King James Bible; Genesis 30:1-3).

The sexual slavery, abuse and sexual violence including Bilhah’s rape by Jacob’s nephew and Hagar’s mistreatment at the hand’s of Sarah serve as inspiration for Margaret Atwood’s canonic feminist novel The Handmaid’s Tale which raises enduring issues including sexual exploitation, infertility and reproductive choice.

Scientific advancement and the criminalization of slavery in the modern world has changed the shape of surrogate motherhood but the need for it remains.

Since surrogacy has become commercial, international and huge in scale, new concerns have been raised about a more systematic abuse of women along cultural and racial lines. Many fear with great cause that the industry for securing surrogate mothers from developing countries opens up impoverished women to exploitation.

Laqipum may well have gone on to have a child with a slave, whose name would never be inscribed in clay. The thought of her should act as a reminder that 4000 years on neither reproductive exploitation nor sexual slavery has been consigned to history.

A paper on the Assyrian tablet appeared in the journal Gynecological Endocrinology.

The tablet is on display at the Istanbul Archaeology Museum.

Catherine Thomas discusses sexual harassment in the workplace on BBC Radio 5 Live
This site uses cookies. Find out more. Continued use of this site is deemed as consent.   CLOSE ✖