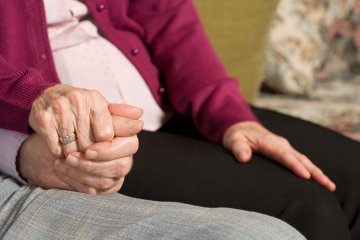 The daughter of a wealthy insurance broker has failed in her legal bid to prevent her elderly father from remarrying.

In a judgment released yesterday, the father, a dementia sufferer in his eighties, was deemed to have sufficient mental capacity to marry his long-term partner. Mental capacity is defined by the Mental Capacity Act 2005 which outlines the circumstances in which an individual can be legally able to make a particular decision.

Should he now remarry then a will drawn up in 2013 dividing his assets between his daughters would be invalidated.

The man in question has three daughters from his first marriage but has cohabited with his long term partner, who is in her seventies, for twenty years. The will would have awarded his partner two thirds of his pension, £300,000 and the right to remain in his home for two years after his death. The remainder of his large estate, including a house worth £1.5m and £125,000 in cash, was to be divided between his three daughters.

In response, his daughter entered a caveat against the issue of a marriage certificate which the Registry office indicated they would consider and also commissioned an independent report that found her father to lack capacity in both respects. The daughter then made an application to the court under the statute guiding forced marriage protection orders. When the case came before His Honour Judge Wildblood in June 2017, he transferred it to the Court of Protection and granted an interim injunction stopping the proposed marriage.

The case then came before Judge Nicholas Marston in a series of three hearings at the Court of Protection.

Judge Marston ruled that although reports indicated the man lacked understanding of "the effect of remarriage on the will and the financial position of the parties", this financial awareness was not necessary to have mental capacity to marry.

That the man has capacity to marry but not revoke his power of attorney has been observed to be somewhat contradictory. Having drawn up a will in 2013 that specifically makes provision for his long term partner who he chose not to marry, Judge Marston’s judgment allows the man to de facto change those provisions. This is while accepting that he does not have the mental capacity to make a conscious decision to vary his will.

Head of private client at Vardags, Christopher Hall, explained that in making this decision the Court of Protection would have been more eager to protect the man’s liberty during his lifetime than protect against financial consequences that he himself won’t feel:

The courts are keen to ensure that the autonomy of vulnerable persons to make decisions for themselves (even unwise ones), is protected. In looking at whether someone has the mental capacity to get married, the courts don’t put too much weight on the person’s ability to assess all of the financial consequences. This can result in inconsistencies, as in this case where an Alzheimer’s sufferer is found to lack the mental capacity to make changes to his lasting power of attorney, but to have the capacity to get married. It is clear that the judge expects the man’s daughters to manage his finances and health as he degenerates further. However the courts have always been very keen not to restrict a person’s right to happiness, in this case by getting married, even if it may affect the financial future of those dear to them. Fundamentally, the Court of Protection’s role is to look after a person’s interest during their life; they do not have a duty to oversee what happens after they die.

After having refused the daughter permission to appeal, Judge Nicholas Marston urged that for the sake of the man, anonymised as DDM, his long term partner and daughters might reconcile:

Finally I would express the hope that the First Respondent and DMM’s 3 daughters, the four people who are closest to DMM, find a way of moving forward together after this very bitter dispute. DMM suffers from a degenerative disease and he is going to need the help of all those who love him in the very near future.

With rising numbers of aging couples divorcing and cohabiting, the Court of Protection are likely to see many more such similar cases where families and partners find themselves at odds over the practical and financial arrangements of loved ones who lack mental capacity. Indeed numbers in that regard are rising too; between 2010 and 2016 there has been a 56% rise in the number of people diagnosed from with dementia alone, diagnoses at the time of writing are 539,062 and climbing. Completion of a Lasting Power of Attorney can not always, as this case demonstrates, provide certainty. Not only does a Power of Attorney require a great deal of planning and forecasting of the donor’s future plans and wishes, the donor has the right to enforce a number of conditions on their attorneys as to when and how the Lasting Power of Attorney may be used. What is certain is that the already vastly overstretched courts of protection will only continue to be stretched further.

You can read more about Powers of Attorney here

Catherine Thomas discusses no fault divorce in radio interview with Nick Ferrari
This site uses cookies. Find out more. Continued use of this site is deemed as consent.   CLOSE ✖