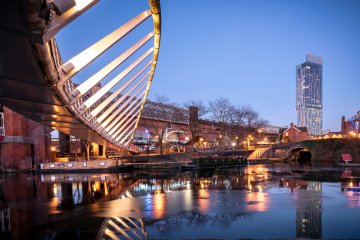 In January 2017, Mr Justice Peter Jackson dismissed a transgender woman’s application for direct contact with her five children. However, after an appeal described as "of profound significance for the law in general and family law in particular" in its potential implications, the judge’s decision to order indirect contact only has been overturned.

The applicant is the biological father who, along with their mother, brought up the children in the ultra-orthodox North Manchester Charedi Jewish community before leaving the family home in June 2015 to live as a woman. Her subsequent ostracisation from the religious community—found by the judge to be entirely due to her status as a transgender woman—gave rise to fears that the children and their mother would also face exclusion from their community, should direct contact be granted.

His Lordship described the case as "troubling", and identified 15 arguments in favour of direct contact being granted. However, he ultimately “reached the unwelcome conclusion that the likelihood of the children and their mother being marginalised or excluded by the ultra‐Orthodox community, is so real, and the consequences so great, that this one factor, despite its many disadvantages, must prevail over the many advantages of contact”. Refusing the application, the judge instead ordered for indirect contact to take place four times a year for each child.

In June 2017, the father was granted permission to appeal the decision, with a hearing taking place before Sir James Munby, President of the Family Division, Lady Justice Arden and Lord Justice Singh on 15 November in the Court of Appeal. The grounds for appeal were threefold:

At the appeal, the judges stressed two principles which they deemed central to the issues brought before them. The first concerns the role of the judge in cases such as this to act as the "judicial reasonable parent", judging "the child’s welfare by the standards of reasonable men and women today, 2017, having regard to the ever changing nature of our world including, crucially for present purposes, changes in social attitudes."

The court challenged whether Mr Justice Jackson could have been acting as a "judicially reasonable parent" as defined above when he reached a conclusion "dictated by the practices of a community which he characterised as involving discrimination and victimisation".

The second principle called attention to stipulates that a judge has "a positive duty to attempt to promote contact; that the judge must grapple with all the available alternatives before abandoning hope of achieving some contact", with attempts at contact to be abandoned only as "a last resort"—as established in Re C (Direct Contact: Suspension) . As the third ground for appeal in the case at hand makes clear, the applicant argued that the judge did not sufficiently carry out this duty. The Court of Appeal agreed that, on the issue of direct contact, his decision was "premature".

With the decision that Mr Justice Jackson failed to offer adequate explanation as to why indirect contact would not pose the same apparent risk of harm as direct contact, the court accepted the appeal on all three grounds. The judgment concluded that more contact with the father was in the children’s best interests, and stressed that the courts must persevere in attempting to achieve this. The case has now been remitted to the High Court, where it will be heard before Mr Justice Holman.

In a case which, at its heart, sees two minorities in conflict, it is fitting that the Court of Appeal judgment details the family court’s obligations under the Equality Act 2010 and Articles 9 and 14 of the European Convention on Human Rights. This includes scrutinising the apparent discrimination faced by the father as a transgender woman, a potential violation of Article 14, as well as interrogating the suggested justification for that discrimination.

On the other side of the equation, there is also the question of whether an order for direct contact would impinge on the rights of the Charedi community, whose right to freedom to manifest their religious beliefs is enshrined in Article 9 of the ECHR. While the Court of Appeal does not give a final view on the matter, it expresses doubt that such a violation could be successfully argued. An order for direct contact would be the product of the court’s decision that contact with the father is a right that is "vital to their well-being", and Article 9 includes a caveat that the freedom to manifest religious belief may be limited insofar as is necessary to protect the rights and freedoms of others. Ultimately, the court must make the welfare of the children their foremost consideration in the decision-making process and, in this case, it seems likely that ordering direct contact will be a necessary step in upholding this paramountcy principle.

Is divorce fair? A closer look at ‘meal-tickets for life’
This site uses cookies. Find out more. Continued use of this site is deemed as consent.   CLOSE ✖