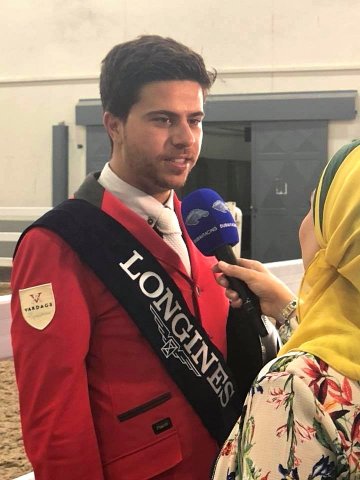 He circled the hard sand course in a victory round, speakers blaring, crowds cheering. As the Longines League drew to a close this weekend, it was safe to say Ahmad Mansour had lived up to his recent epithet - "one of the fastest men in the UAE”.

It was a difficult, technical course. The winning round demanded manouvring through sharp, abrupt turns. Of all the top riders, Ahmad was the only to have a clear ride.

The win follows a long, gruelling season for Ahmad and Estoril and a string of exceptional rides in competions up and down the UAE. The pairing of the hot, compact bay mare, Estoril de Vardag, and gifted, Jordanian showjumper Ahmad Mansour has been a notable success story. It was, in Ahmad’s words, "love at first sight" and since then their speed and synergy has made for an unbeatable showjumping combination leading the ranks at the national shows.

It’s been an exciting season in the UAE for Vardags Equestrian. In recent weeks Ahmad’s student Helena Vardag-Walters made her successful debut in the nationals on Hungarian warmblood Atletic de Vardag, establishing herself in the eventing circuit as one-to-watch, a huge step-up in her riding career. Ahmad worked hard to develop Atletic%27s showjumping skills and this outing with Helena%27s at the Gulf Elite Tour was very encouraging. Ahmad%27s recent training and riding successes have not been restricted to showjumping, having won the hunter trial cross country on Fuego Blanco de Vardag at the Emirates Equestrian Centre back in March.

Seeing a tired but exhilarated Ahmad and Estoril canter victoriously around the sand arena to Pet Shop Boys’ Go West, was in the words of delighted patron Ayesha Vardag, “the most fabulous end to a season which has been truly incredible’.

She praised the "beautiful, beautiful riding, careful tactics and a superfine mare who gives her heart and soul even after an extraordinarily gruelling season."

Where will Vardags Equestrian set their sights next? Well, rumour has it they are carrying a torch for the most famous sporting competition of all. Watch this space...

Scottish man who murdered his mother made executor of her estate
This site uses cookies. Find out more. Continued use of this site is deemed as consent.   CLOSE ✖