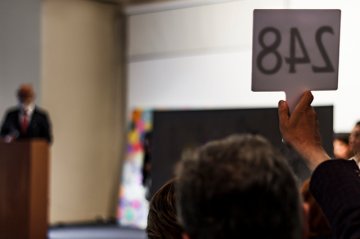 Getting divorced can take its toll on a party’s finances. That’s why it is so important to get the best settlement possible. The evidently pragmatic Russell Crowe has become one of the most recent in a line of celebrities to sell off property connected to their fame, hoping for it to be eagerly snapped up by fans.

The Australian actor recently divorced his wife of ten years, Danielle Spencer. He has organised for a sale, entitled ‘The Art of Divorce’, to take place on 7th April (the couple’s wedding anniversary), hoping to raise around £2 million. Though, via Twitter, he frames the auction as a more of a spring clean, given Ms Spencer is rumoured to have been awarded a $20 million settlement, it wouldn’t be surprising if, as reported, the sale was intended to recuperate funds lost to his divorce.

Among the items up for sale are film props such as the violin played by his character in Master & Commander (worth around £81,000), his character’s sword and armour from Gladiator (worth £19,500) and the chariot he used in the same film (worth around £3000). Some jewellery is also included - a £70,000 diamond ring he bought for Danielle, but which “wasn’t a great gift as it was so expensive she never wanted to wear it much for fear of losing it” and over 29 watches from luxury brands like Rolex and Cartier (reportedly over half Crowe’s watch collection). Vehicles are also being sold, including a £250,000 black Mercedes used on the couple’s wedding day and Crowe’s custom built £300,000 motorbike, decked out in the colours of his favourite rugby team.

Another figure who reportedly hoped to capitalise on fame in order to fund divorce proceedings is Paul Burrell, Princess Diana’s former butler and so-called “rock”. In 2016, Burrell, then running a flower shop in Cheshire and wife of 32 years, Maria initiated divorce proceedings after the pair reached a mutual decision. After writing two books about Diana – entitled A Royal Duty and The Way We Were - appearing on I’m a Celebrity, Get Me Out of Here, and being arrested in connection with allegedly having taken some of Diana’s belongings after her death (including CDs, family photo albums and designer clothes, totalling 342 items) he apparently hoped to book more reality TV appearances to help pay for his divorce. He also put the family home on the market for £475,000. The couple had been living apart for two years after Maria moved to the USA following a confession from Burrell that he had not told “the whole truth” at the inquest into Diana’s death.

In 2013 famous comedy actor John Cleese began selling off props from Monty Python and the Holy Grail, as well as photos from other popular sketches in order to fund his divorce from his third wife, Alyce Faye Eichelberger. After being required to pay her £1 million in cash and assets when they divorced in 2008 and an additional sum of almost £1 million a year until 2016, the Fawlty Towers star embarked on a stand up comedy tour he named the ‘Alimony Tour’ and moved to Monaco (where he would benefit from lower taxes), before resorting to selling memorabilia.

This practical and totally legitimate method of funding a divorce should be distinguished from the tactic of liquidating assets in order to prevent the other party getting hold of them. Having the best legal advice on a possible pre-nuptial agreement to protect assets going into the marriage, or on a divorce settlement, can help avoid having to go to such desperate lengths later on.

High Court order protects six year old from the risk of FGM
This site uses cookies. Find out more. Continued use of this site is deemed as consent.   CLOSE ✖