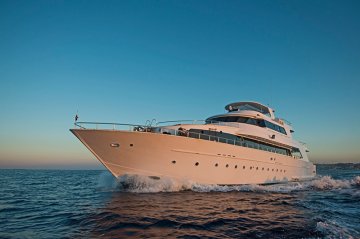 It has emerged that the super yacht of the oligarch Farkhad Akhmedov has been impounded after the English courts ordered his assets to be seized following his acrimonious split. After showing “naked determination” to obstruct the courts’ demand for disclosure, this is the latest episode in the enforcement of his record-breaking 2016 divorce settlement.

Azerbaijan-born Mr Akhmedov met his ex-wife Tatiana in Russia 1989 when she was just 17. The pair tied the knot in 1993 when Tatiana was pregnant with their first child and then moved to England. Although now an oil and gas tycoon of “staggering” wealth, Mr Akhmedov, 61, started his career selling sable furs. Primarily built up during the marriage, his fortune skyrocketed in 2012 after he sold his shares in the Russian company ZEO Northgas for $1.375 billion. After having a second child together, the Akhmedovs divorced in Russia in 2000 but their financial settlement was finalised in England years later, provoking the current drama.

In December 2016, Mr Justice Haddon-Cave awarded 41-year-old Tatiana Akhmedova £453,675,152 in what was the biggest divorce settlement ever seen in the UK. This enormous sum was however only 41.5 percent of the total marital assets, estimated at £900 million. The £453 million was broken down into the contents of their family home in Surrey worth £2.5 million, a £350,000 Aston Martin, the couple’s extensive art collection valued at £90 million, and a lump sum of £350 million to be paid by Mr Akhmedov and a Panamanian company. Two years later, Tatiana claims that she hasn’t “received a penny” of what she is due, although her ex-husband insists he gave her their family home in Weybridge estimated at £20 million.

This dispute over assets has been a defining feature of the Akhmedov divorce. Although the pair enjoyed an ostentatiously lavish lifestyle, the billionaire shied away from showing the court his full fortune. Indeed he squirreled his wealth offshore, took steps to conceal his art collection and tried to shift British assets, moving the money further and further away from his ex-wife’s reach. During divorce proceedings, Haddon-Cave J called Mr Akhmedov’s refusal to give full and frank disclosure “seriously iniquitous”.

“He has displayed a cavalier attitude to these proceedings and a naked determination to hinder or prevent the enforcement of his ex-wife’s claim.”

Eventually, to understand the extent of Mr Akhmedov’s wealth, Haddon-Cave J controversially ordered his ex-solicitor Anthony D Kerman to divulge the information without telling the billionaire that he had been instructed to do so, or tipping him off about enforcement. Mr Kerman gave the court the information that they needed, revealing that the art collection was held in Lichtenstein. On appeal, Sir James Munby held that his fellow judge’s choice was “justified” however Mr Akhmedov, furious that his wealth is now out in the open, claims that he has experienced “no justice” since this episode.

In the newest state of affairs, the English court is putting its worldwide freezing order into effect. Mr Akhmedov’s £115 million super yacht ‘Luna’ which he bought off Chelsea owner Roman Abramovich in 2014 was seized on Valentine’s Day in Dubai. After its purchase, Mr Akhmedov spent over £50 million refitting the vessel which boasts nine decks, two helipads, ten VIP rooms and the largest swimming pool of any super yacht. Agents acting for the High Court will be within their rights to sell the yacht if Mr Akhmedov fails to honour the divorce settlement. Still docked in Dubai, the crew of 50-strong are said to be living on the yacht since they too are barred from leaving the UAE.

Maintaining that the English courts were “wrong” to have awarded his ex-wife such a significant sum since the Russian courts already provided for her, it is unlikely that Mr Akhmedov is going to fulfil his obligation without putting up a fight, even when his prize asset Luna is at stake. However, as contempt of court amounts to a prison sentence under English law, this game of cat and mouse may not last for long.