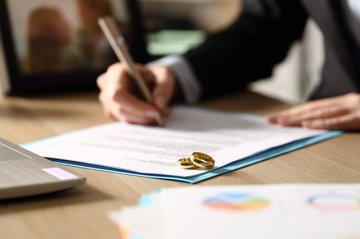 TV star Ant McPartlin could be set to attempt a contentious “genius manoeuvre” in his divorce case.

Ant, of Ant and Dec fame, and his make-up artist wife, Lisa Armstrong, have been together for 23 years. They met at a Smash Hits concert in the mid 1990s. They were then both performing with pop groups – Ant was already working with Dec as PJ & Duncan and Lisa was a member of British band Deuce. They married in 2006.

Per press reports, Ant has admitted he has “let down” his wife. He entered rehab last year where he sought treatment for depression and alcohol and pill abuse. The couple haven’t lived together since he was discharged. “I’ve put Lisa through hell with mood swings and depression and how it affects you. I’m very sorry about the effect it has on partners. This kind of stuff puts strains on any marriage.”

Now, their divorce could cost him half of his wealth. House of Lords case White v. White established in 2001 that, once needs have been met, the starting point when dividing matrimonial property is a 50/50 split. Since a marriage is seen as a partnership, no distinction is made between the different sorts of contributions towards it, such as those of the roles of breadwinner or homemaker. Since Ant and Lisa have been together for so long, the matrimonial pot to be divided between them is likely to include most of his reported £62 million fortune. Lisa could also be entitled to a portion of his future earnings. Lisa hasn’t spoken to the press since the split was announced but her social media might be an insight into how she views her contribution. She recently liked a comment from a fan that stated “Your unconditional love and support made A who he is.”

The sharing principle outlined in White v. White, however, doesn’t ensure a 50/50 split in every case. Ant’s lawyers may wish to employ a stellar contributions defence to protect his assets. The argument is available to very few – it’s been attempted by celebrities such as Paul McCartney and more recently, Ryan Giggs. The argument asserts that one party to the marriage possesses a special skill that is so impressive and unique that it merits a departure from the 50/50 standard – their contributions are “unmatched” by the other. The argument is rarely successful, and is confined to those who have excelled beyond the bounds of even their well-remunerated peers. It remains controversial amongst lawyers too, as it arguable resurrects the split between home maker and breadwinner.

If argued successfully, the argument could change Lisa’s divorce pay-out considerably. She could receive 37% of his fortune – an estimated £25 million, rather than half and a portion of future earnings – estimated at £155 million.

Sir James Munby gives guidance warning against accidental bigamy
This site uses cookies. Find out more. Continued use of this site is deemed as consent.   CLOSE ✖