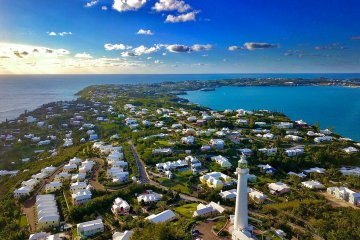 Known for its turquoise waters and unusual pink sand beaches, Bermuda has long been a popular hot spot for honeymooners and destination weddings. A little less known, perhaps, is its relatively high rate of divorce.

Bermuda, also known as The Somers Isles and the Devil’s Isle, is Britain’s oldest overseas territory, but it is a self-governing island, which means that it has its own written constitution and laws.The rules on jurisdiction closely resemble those in the UK. Bermuda courts will have jurisdiction to hear divorce proceedings where either of the parties are domiciled in Bermuda, or where either of the parties are habitually resident (known also as ‘ordinarily resident’) in Bermuda in the year prior to the proceedings being begun. If the divorce or nullity of marriage has been granted in Bermuda, the courts will also then have jurisdiction to hear applications for financial relief. The law relating to divorce, financial proceedings and children matters are governed by the Matrimonial Causes Act 1974, which closely resembles the UK’s Matrimonial Causes Act 1973, with some notable exceptions. One such exception is that the ‘one year rule’ does not apply to divorce proceedings issued in Bermuda, instead, couples must have been married for a period of three years prior to an application for divorce, unless it can be proven that one party will suffer ’exceptional hardship’ or ’the actions of the respondent show exceptional depravity’ (s.7 MCA 1974). More significant differences come to light when determining the division of marital assets in Bermuda, which are governed by ss. 27 and 28 of the 1974 Act. The powers of the courts in Bermuda largely mirror the wide-ranging power of the courts in the UK to make financial orders, but with some limited exceptions. The MCA 1974 does not provide the courts with a power to order the sale of a property, and Bermuda does not have a specific provision for making pension sharing orders. Instead, the courts will likely consider pensions within a broader context, for instance on consideration of the value of any ‘benefit’ either party may lose ‘by reason of the dissolution or annulment of the marriage’, s. 29(g) MCA 1974. However slight these differences may seem, it is possible that they could lead to a different result than financial proceedings conducted in the UK. Bermuda has also not adopted amendments made to the UK’s legislation, which saw an emphasis on the importance of aiming for a clean break between the parties. However, a glance at recent case law in Bermuda would suggest that Bermuda is following the UK’s lead, and will generally follow this guiding principle where possible. Very similar considerations will also be taken into account when the courts are deciding how to use its powers under ss.27 and 28, such as the income and earning capacity of both parties, their financial needs, obligations and responsibilities, and the standard of living enjoyed by the family. Notably, the Act also includes a provision that the courts should consider these factors, and then exercise their powers to place the parties ‘in the financial position they would have been in if the marriage had not broken down’; a provision which was repealed in the UK. Despite some legislative differences, UK precedent has clearly had an impact on the case law of Bermuda, and the starting point when considering the division of assets will be to decide what is ‘fair’. The courts are likely to consider the leading UK authorities to achieve a result that takes into consideration the needs of the parties, any compensation that may be needed to make up for one party sacrificing financial success during the length of the marriage, and the principle of sharing, as set out in Miller v Miller; McFarlane v McFarlane . The courts may also depart from equality in certain cases, just as in the UK, which illustrates the courts’ willingness to follow UK precedent, despite some differences in core legislation.

ONS figures show that divorce is declining
This site uses cookies. Find out more. Continued use of this site is deemed as consent.   CLOSE ✖