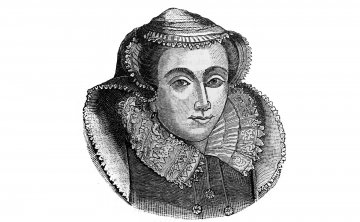 Mary, Queen of Scots is probably best known for having her head chopped off on the say-so of her own cousin, Elizabeth I. She is also known for having a colourful relationship history, with three ill-fated marriages.

Husband One: Mary was sent to France at the age of five, where she was betrothed to the future King of France. Sadly for Mary, and the Catholics in Scotland, Francis was struck down with a brain tumour and died a year into the marriage. Widowed at the age of sixteen, Catholic Mary returned to her homeland – Protestant Scotland – where she knew little of the ways of her people, and came to rely on the advisors around her, including the Earl of Bothwell (who becomes more important later).

Husband Two: Love and politics came hand in hand in the 16th century. In order to strengthen a claim to the English throne, Mary chose Lord Darnley to be her next husband. Darnley was also a Catholic and their marriage led to an open rebellion, led by Mary’s half-brother, the Earl of Moray. Although Darnley succeeded in getting Mary pregnant and therefore provided an heir to the Scottish throne, Darnley was not the husband Mary hoped he would be and he quickly fell out of favour, not least because of his increasingly arrogant demands to have the ‘Crown Matrimonial’, a request refused by Mary. Mary spent more time with her close friends, including the former musician David Rizzio. On 9 March 1566, blinded by a fit of rage and jealously, Darnley and a group of advisors, stormed a heavily pregnant Mary’s apartment and dragged Rizzio to the room next door where he was stabbed to death (56 times). Mary tried, but failed to forgive Darnley and his fate was sealed…

In November 1566, Mary was presented with two options: divorce or “other means”. Refusing a divorce on the grounds that it would make her son, born in June 1566, illegitimate and bring his claim to the throne into question, Mary tip toed around the “other means” by saying she wanted “nothing against her honour”. The nobles signed a bond to murder Darnley and Mary sought comfort in the arms of Lord Bothwell; the two exchanging their famous Caskett love letters in this period.

In February 1567, Mary convinced Darnley to accompany her to Edinburgh. On 9 February, Mary left an ill Darnley at home to dance the night away at the wedding masque of a loyal servant. On the same night, the house in which they were staying was blown up. Darnley managed to survive the explosion… but he was found strangled and stabbed outside the property. And that was the end of Husband Two.

Husband Three: Despite it being known that most of the nobles wanted Darnley dead, fingers pointed at Mary and Bothwell. Placards appeared in Edinburgh depicting Mary as a whore and accusing her and Bothwell of the crime. Happily for Mary, Bothwell “abducted” her and took her “captive” to Dunbar Castle (even Mary’s defenders find it hard to believe she knew nothing of the plan to abduct her). Here, Bothwell allegedly raped her and forced her to agree to marry him. The two were wed on 15 May 1567 in a Protestant service, with Mary appearing to give up her Catholicism for Bothwell. Mary had believed that the marriage between them was supported. She could not have been more wrong: just a month later, Mary and Bothwell were cornered by the Protestant lords and Mary agreed to give herself up so long as Bothwell was given safe passage into exile. And so the couple had love’s last kiss before Bothwell galloped away to try, and fail, to raise an army to break Mary free. Mary was forced to abdicate the throne to her young son, James, and at the age of just 24, she was imprisoned for the rest of her life. Bothwell died in Denmark, ten years later, and Mary met her end at the hands of an executioner and… three blows from an axe.

Can love conquer all?

Our love lessons head into the 17th century and the banks of Loch Ness. Mary Grant, daughter of the Laird of Grant, who occupied Urquhart Castle, fell in love with Donald Donn and, unfortunately for them, their love story shows that love doesn’t always conquer all. Some reports allude to Donald Donn as a Scottish “Robin Hood” type fellow. A nobleman, a scion of the MacDonnells of Keppoch, Donald gave generously to the poor. Mary Grant fell for his charms but her father refused to have Donald Donn as his son-in-law and forbade the lovers to meet.

Mary and Donald defied her father and continued to meet on the banks of Loch Ness. Stories have it that Donald left a group of his men, with whom he had taken a herd of cattle to give to the poor, to go and meet Mary. In his absence, his men were approached and the Laird of Grant was called upon to find out how the men had found shelter so close to Urquhart Castle. The Laird of Grant placed the blame on Donald Donn and ordered his death. Donald fled but his enemies tricked him into leaving his hideout by staging a meet up with Mary. Donald was captured, taken to the dungeon of Urquhart Castle, and sentenced to death. Mary’s pleas to her father to spare his life fell on deaf ears. Legend has it that as his head parted with its body, Donald’s last words were ‘Mary, lift the head!’

Kathryn Mason’s Love Lessons from history can be read here.

The Family Synod: outcomes
This site uses cookies. Find out more. Continued use of this site is deemed as consent.   CLOSE ✖