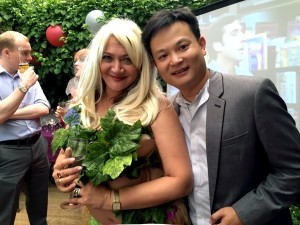 2015 sees the celebration of Vardags’ first decade. It’s come a long way from the one-woman show with a phone line and a fax machine that was Ayesha Vardag Solicitors back in 2005.

To celebrate in appropriate style, the Vardags’ First Decade Party took everyone who’s been involved with the firm over the years back to where it all began: in the Islington townhouse whose front room housed the very first ‘office’. So, in true Vardags style, fancy dress – with a 2005 theme – was the order of the evening. Guests were encouraged to dress ‘totally 2005’, taking inspiration from film, music, technology or any cultural development or event from that year.

All this led to a motley crew of characters. The house was variously invaded by the cast of Desperate Housewives, Star Wars, Madagascar and Harry Potter, to be joined by Shakira, Paris Hilton, Nicole Ritchie, Amy Winehouse and the Pussycat Dolls, to name but a few.

With a free-flowing cocktail bar, movie screens and an Arabian tent, it was the perfect way to honour Vardags’ explosion onto the family law scene and subsequent growth over the intervening handful of years.

Of course, Ayesha’s speech honouring the firm she’d built from the ground up left few dry eyes in the house.

If there were costume prizes to be given – which there were not, but perhaps should have been – the prize for wittiest costume might have been awarded to two people in particular. Firstly, to business executive Robert Kelly, for his ‘R Kelly trapped in the closet’ costume (a nod to the man’s infamous hip hopera from 2005 as well as Robert’s namesake).

Secondly, to associate Charlotte Sanders, who came dressed as a Facebook page. Her writable ‘wall’ was ingenious and never ceased to be a talking point throughout the night. Thanks to everyone who attended – solicitors, barristers, business collaborators of all stripes – who helped us celebrate the immense leaps and bounds with which the firm has grown over the last decade; moving from strength to strength and still going stronger than ever.

Here’s to the next decade.