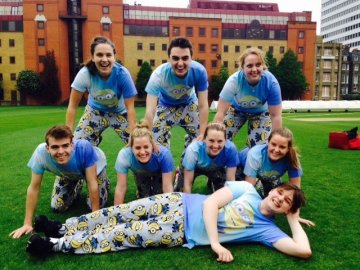 On Friday 8 May 2015, a motley crew from the Vardags team dressed up in thoroughly becoming Despicable Me pyjamas and headed over to the grounds of the Honourable Artillery Company on City Road for a round of the most famously vicious game: dodgeball. Not just for the comedy value of course, but in aid of charity for the annual Vestra Wealth Dodgeball Tournament 2015.

The Vardags team, named Vardodge, were one of 24 teams competing alongside other legal and financial firms. The whole gang had lots of fun, got some exercise and of course raised money in aid of child literacy charity Beanstalk, with whom Vestra Wealth have long had a partnership. Beanstalk trains volunteers to go to schools and help struggling children with their reading.

Vardodge managed to beat Charles Russell, but unfortunately lost to hosts Vestra Wealth. Not that this should be taken too hard: Vestra have been staging an annual charity dodgeball tournament for the last four years, so are seasoned practitioners. Accountancy firm Saffery Champness ultimately emerged victorious.