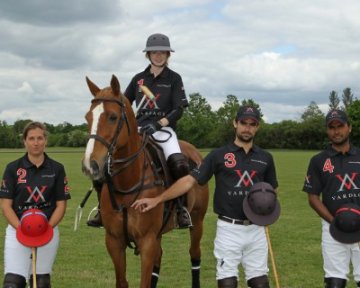 This Friday, the Archie David Cup—the UK’s leading 8-goal polo tournament—commences and we can proudly announce that our very own Vardags sponsored polo team is all set to compete.

As you can see from our selection of photos, the team will be playing in style -kitted out in chic black polo shirts, shot through with signature Vardags’ red and silver, and emblazoned with our logo. Many thanks to the Printing Boutique for creating our wonderful team shirts.

Vardags polo team will be kicking off the event at Guards Polo Club, partaking in the very first game of the tournament at 12 noon on Friday. For this event, we’re welcoming back the indomitable Sarah Wiseman and Alice Gipps who led us to victory last Summer at Berkshire Festival. Alice Gipps, player Number One, has over 15 years of polo experience, and first saddled up to ride aged three. She has won a host of international accolades, including the 2016 Thailand International Ladies, Polo Escape and the 2010 Coworth Park Ladies International.

Alice has competed in Ireland, Argentina, America, India and Thailand, where she has even partaken in elephant polo. Aside from riding, Alice is a leading polo photographer and polo journalist. Sarah Wiseman boasts an impressive curriculum vitae, and is ranked within the top four female polo players in the world. She has represented England several times, most notably for the International Cup in Wellington, Florida in 2012.

Sarah has a mixed handicap of 2 goals and woman’s handicap of 7., and is the the highest ranking female arena player in the world, with a handicap of four goals in the arena. Last year, she won both the Malaysian Open and USA Open.

Our 2015 ladies team testified to the sheer talent and dynamism which abounds within women’s polo, but for this year’s mixed-gender event we’re delighted to introduce two new members of the team: Lucho Aguirre and Miguel Alejandro Ayala. Lucho Aguirre has an impressive handicap of 3 and, aged just 27, has been playing polo for over half his lifetime. He has played up to 20 goals in Argentina and 15 goals in UK, in the Royal Windsor at Guards Polo Club, and the Harrison Cup at Cowdray. Lucho is a member of the Binfield Heath Polo Club. Last but certainly not least, we welcome Miguel Aljandro Ayala to the Vardags Polo Team. Miguel began playing polo in Cordoba, Andalusia when he was 14 years-old. He has since played in a number of different clubs all around the world. Miguel worked for Polo Escape, starting their young horses, and managed the Prince of Brunei string in Thailand for KingPower.

In 2015, Miguel managed a trip to the Philippines for a tournament in 2015 with Polo Escape Patron Robin Lourvanij. Currently dividing his time between Argentina and the UK, Miguel is playing the English season alongside retraining racehorses for Campana Polo.

We are so excited to have such an accomplished team playing on behalf of Vardags, and wish Alice, Sarah, Lucho and Miguel the very best of luck!

Divorce lawsuit against billionaire Steven A. Cohen dismissed
This site uses cookies. Find out more. Continued use of this site is deemed as consent.   CLOSE ✖