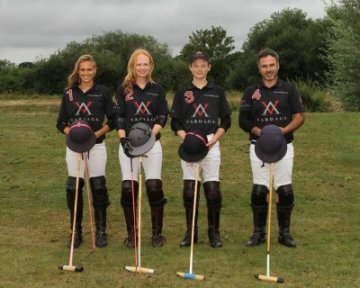 Following a fantastic performance at the Archie David Cup, veteran Vardags player Alice Gipps is back, alongside some new faces for one of the most competitive 2 goal competitions in the country. The team couldn’t have got off to a better start, securing a 6-4 win against worthy competitors, Amber.

Prior to the game, we caught up with new player for Vardags Dayna Waechter to get her thoughts on the tournament: “Last year’s Polo Festival at the RCBPC was a great experience with good, competitive games of polo, it was overall an amazing event. I’m really looking forward to play in the Festival again this year with Vardags!”

A member at Ranelagh, Dayna started riding when she was just 5 years-old near her hometown of Zurich, Switzerland:

“There my passion for horses started! A few years later I was lucky to get to ride my friend’s polo ponies at Polo Park Zurich, where I very soon started with some Junior polo games and club chukkers. I was given my first very own polo pony, Nevadita, when I was 12 years old. I brought her to England and she now has her first filly foal, hopefully a future superstar!”

After spending seven months in Argentina to learn how to break young horses, Dayna is currently retraining former racehorses for polo in the UK. “It’s been a success so far,” says Dayna, “the horses are all doing great and most of them seem to have a very promising future.” As for the rest of the team, those following Vardags’ polo adventures will remember Alice Gipps from both the Archie David Cup and last year’s Berkshire festival.

Alice boasts a host of international awards, as winner of the 2016 Thailand International Ladies, Polo Escape and the 2010 Coworth Park Ladies International, to name just a few.

Alice, who brings over 15 years of polo experience to the team, has competed in Ireland, Argentina, America, India and Thailand, where she has even partaken in elephant polo. Aside from riding, Alice is a leading polo photographer and polo journalist. Competing alongside Dayna and Alice is 17 year-old Hugo Taylor. Despite his young age, Hugo already competes all over the country in every level up to 18 goal at Guards, The Royal County of Berkshire Polo Club, and Cowdray. He was even the reserve for the King Power high goal team filling in for the patron at one of the games and the team went on to win this years British Open in Cowdray.

An up and coming superstar on the polo scene, Hugo has also played in the USA, Argentina, South Africa and Mongolia. Fernando ‘Pancho’ Torres is our fourth and final player for the tournament. Pancho is a member at Guards, Emsworth, RCBPC and White Waltham and currently owns 7 ponies in the UK. Hailing from Mar del Plata in Argentina.

Pancho been coming to play in the UK for 15 years and he’s also played all over the world in countries such as Dubai, China, Spain to name a few. His most famous win so far is the Estimulo in Argentina, one of the toughest tournaments of the season, with the finals at the famous Palermo polo grounds in Buenos Aires.

Congratulations to Vardags polo team for their success so far, we do hope that their good luck continues for Friday’s 17:15 game against Wodehouse Stud. If you are planning on attending the event, or would like more information about the tournament, visit the Royal County of Berkshire Club website.

Divorced pilot who barricaded himself in marital home faces jail
This site uses cookies. Find out more. Continued use of this site is deemed as consent.   CLOSE ✖