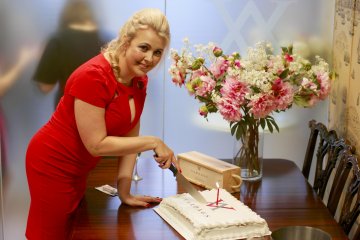 On the sunny afternoon of Friday 9th June, the Vardags Manchester team jubilantly saw off the working week with a celebration of the office turning one. The glamorous hostess, Head of Office and Director Emma Gill, welcomed clients, colleagues and friends to raise a glass to the success of Vardags’ move to Manchester.

Vardags Manchester, established in June 2016, is located in the imposing Grade II listed Ship Canal House on King Street. Vardags has offices on the 4th and 8th floors, both offering impressive views over the grand architecture of the historic city centre. Inside the towering 1920s building, the Vardags offices are sumptuously decorated in antiques and items reflecting the office’s Northern location, including walls bedecked in vintage prints of merchant ships. The office workers now also share their space with a colony of bees, the emblem of Manchester, who will start to produce honey in a year’s time from their rooftop hives.

Over the past year, Vardags Manchester has grown from a small capsule to a team of ten highly ambitious women. In true Vardags style, the Manchester team made an instant impact and were nominated for the ‘Best Family Law Team’ at the Manchester Legal Awards 2017 after only a matter of months.

On Friday, the Vardags Manchester doors opened at 4.30pm and the rooms soon filled with the sound of clinking glasses and spirited conversation. The Manchester team had prepared a fine spread of English cheese, crackers and other treats which fuelled the guests late into the evening. The pièce de résistance, however, was the delicious birthday cake with its personalised Vardags iced topping. Emma Gill did the honours of blowing out the single candle and making the first cut, to much applause and popping bottles.

The revellers were encouraged to take photos of themselves with the custom-made Vardags 1st Anniversary Snapchat filter from the office’s robot. This resulted in many weird and wonderful pictures which guests shared on Twitter using the hashtag #1stanniversary.

Many thanks to the Manchester team for rounding off a fantastic year with such panache – may the second year be just as outstanding at the first!

Head of Palestinian Islamic Courts bans divorce during Ramadan
This site uses cookies. Find out more. Continued use of this site is deemed as consent.   CLOSE ✖