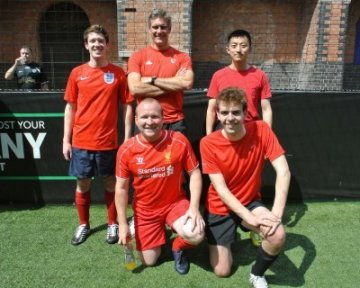 Not content with tackling dodgeball, Vardags are branching out in the world of team sports. This time, it was the guys’ chance to shine. In a manner of speaking.

Here is the match report from the Vardags football team debut last Thursday at the Simmons Gainsford 5-a-side tournament.

No doubt handicapped by leaving our best players back in the office – who could have summoned the spirit of the lionesses – the team did at least manage to complete all their group matches.

It was perhaps wishful thinking that the team could hope to compete with teams who actually had matching shirts, and who do in fact practise and play matches.

However Captain Charlie Bell remained positive: with no hope of squad rotation (as we had no substitutes), in the 30 degree heat under Shoreditch railway arches, he used the rules to our advantage as follows…

The award of an indirect free kick will be given for the following offences:

a) Ball played over head height – make sure the tallest member of the office turns up so we never had free kicks awarded against us;

b) Goalkeeper not returning the ball underarm – allow the net to catch the ball, so as to avoid using the arms;

c) Obstructing an opponent – in the absence of injunctive relief, pass the ball to Guan to fire a missile at the opponent’s goal;

e) Player returning the ball directly back to the keeper after receiving the ball from him – Danny needed a rest occasionally after parrying so many shots, so we tried to keep the ball upfield.

A player who commits any of the following offences will have a direct free kick awarded against him:

a) Charges an opponent – Charlie and Rob gave no quarter in their exchanges but always within the law;

b) Body checks or slide tackles – Chris tried to use his rugby knowledge in ex parte tackles outside the referee’s line of sight;

c) Holding the fences – this became increasingly necessary as the matches wore on;

d) Any contact by a defending player towards an attacking player whilst in the corners of the pitch – employ clever use of technical arguments to back opponents into the corner when breath allowed.

The Cohabitation Rights Bill: protection for unmarried couples in case of bereavement
This site uses cookies. Find out more. Continued use of this site is deemed as consent.   CLOSE ✖