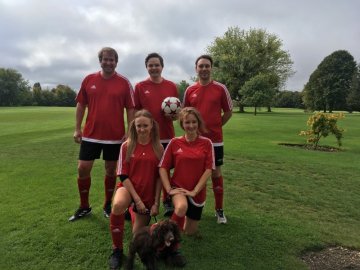 The Vardags five-a-side football team was resurrected this Sunday for the “Suits in Boots” competition in Cambridge in aid of Street Child International. Arriving at the Møller Centre at Churchill College, the team were hopeful of a triumphant afternoon, having surpassed the firm’s previous outing by arranging matching kit, and obtaining a supporter and a mascot. Such hopes were to be short-lived.

The first match, against reigning champions Studio Cambridge, proved to be a reckoning for the team, led by Cambridge director Arron Bortoft, assisted by Kaspar Newby, John Oxley and Victoria and Christina Muir. From the kick-off the valiant Vardagians were ripped apart by laser-sharp passing and pin-point finishing. Eight minutes later, the match ended as an eight-nil drubbing, Vardags only troubling the scorer as ‘keeper Bortoft turned the ball into his own net.

Changes were needed, and it was now that the team settled into its permanent formation – Kaspar “not Schmeichel” Newby in net, Borty and the Ox up-front, with Vardags’ answer to the Charltons, the Muir sisters in defence. It made little difference, though switching to the pitch with the small goals saved some blushes.

A series of defeats followed, as it transpired the other teams had done such things as trained together and played before. Vardags wore it well, however, pressing on and occasionally indulging in almost adequate moves. Undone by a lack of skill and physical fitness (not helped by the lack of subs), the firm soon became the group’s whipping boys.

After six successive matches without a goal, a ray of sunshine finally broke through. After a defensive scuffle, the ball fell to the Ox, who drove forward taking the ball past two defenders. Charging through the opposition half, he looked for help and saw Victoria bursting through to his left. An incisive lay-off led to Victoria’s left foot and the ball was deftly slotted into the onion bag: Vardags 1, Cambridge Design Partnership… several more than 1.

Vardags had at least won hearts and minds, and that singular goal was greeted with rapturous applause from all of the assembled. Shortly after the heavens opened and the final match was called off. Buoyed by their breakthrough, the Vardags team retired to a local pub for refreshments and Kaspar’s statistical review of the team’s efforts.

At the end of the tournament, midfield maestro John Oxley commented:

“This was always going to be a transitional tournament, coming so soon after the end of the transfer window. The gaffer has brought in some new players, and they will always take some time to bed in. The team gave 110% out there, nothing left in the locker, but they were all just too good for us. At the end of the day, there are some positives to take from our performance. We just have to put this series of one-sided, crushing defeats behind us and focus on the rest of the season. If there is one.”

As some fans began to speculate about the future of player-manager Arron Bortoft, the board could not be reached for comment.

Literary legal advice: Karenin v Karenina
This site uses cookies. Find out more. Continued use of this site is deemed as consent.   CLOSE ✖