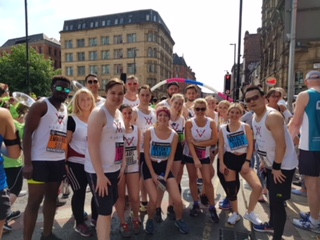 To many, it was an innocently summery Sunday, sandwiched between two bank holidays. What bliss. To the runners, the symbolism was rife. The sunlight streaming down became a spotlight on last night’s makeup. The cheers of excitable crowds turned to jeers at token training plans. The music permeating the streets served as reminders of last night’s “quiet night in”... At Ship Canal House, the team gathered. Upon arrival, each member partook in an initiation ritual involving ceremonial dress. One by one, glowing shoulders emerged, as the first ever Vardags wife beaters – pressed and ironed, no less – were donned. John took this one step further and had brought little tiny shorts to match, causing envy and fear amongst the team. After a short scuffle, we pulled together, and strode to the start line to join the throng (ducking out of sight of Hall Brown so as not to outshine our competitors). After some inevitable selfies, and a near-knock-out by a trombone from the neighbouring band, the countdown began… and we were off! Together for the first kilometre, we made unspoken pacts (‘may the best Vardaganians sprint!’), and began to settle into our respective paces. Great excitement was caused by the first ‘mist tunnel’, which gave a not-unwelcome water-park-feel to the event, being the 45 Degrees Celsius that it was. Nothing quite surpassed the sweaty handful of Jelly Babies at half-mark; however, water was undoubtedly the most precious commodity. By kilometre 7, we were well-distributed amongst the moving crowd to ensure maximum publicity. From here onwards, surprise encounters with fellow team members consisted of much enthusiasm, but minimal conversation. The last few kilometres don’t bear recounting, but each and every one of us made it. And, after scraping ourselves off the floor, we returned to the office to the welcome sound of popping Prosecco. Thank you, Manchester, for a truly excellent day out.

Match report: Vardags does Manchester 10K
This site uses cookies. Find out more. Continued use of this site is deemed as consent.   CLOSE ✖