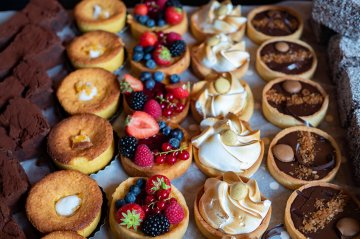 The Vardags team revealed some hidden talents on Friday when we staged a ‘Bake Off’ in aid of Comic Relief. Organised and compered by paralegal Chloe Wake and executive assistant Joe Maniski-Luke – aka our resident Mary Berry and Paul Hollywood – the turnout for the event was impressive, both in terms of contributors and, literally, the way that the cakes turned out.

After a day spent grazing guiltily by many in the office, the judging took place. This was not an easy feat, given the quality of the efforts that ranged from multicoloured cupcakes to the best bread many had ever tasted. In the end, these were the way the prizes – in the form of decorative wooden spoons, naturally – went:

And finally, the overall Star Baker prize was awarded to Sarah Hogarth’s strawberry milkshake cupcakes, which would not have looked out of place in the Hummingbird Bakery. The icing on the cake, so to speak, was that collectively we managed to raise a wholesome £129.60 for Comic Relief.