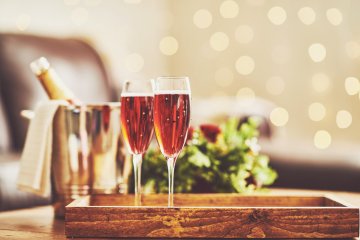 While the city’s students tucked themselves into their college rooms to revise, the champagne began to flow in Cambridge’s Vardags office.

Last night ’the Diva of Divorce’, Ayesha Vardag welcomed guests to the office launch, which was celebrated in true Vardags style - by dancing the night away. Guests enjoyed live music with drinks and hors d’ouvres in sumptuous surroundings. The historic building, dressed generously with Georgian antiques, sits opposite Great St Mary’s church, directly overlooking Senate House and just off the iconic King’s Parade. It was a fitting inauguration: the drinks were abundant, the people fabulous and the conversation sparkling.

Midway through the evening the celebrations were threatened when a suspicious suitcase saw the corner of King’s Parade cordoned off, and our party evacuated by police officers. With one hopeful guest firmly assured that the very charming officers were not in fact adult party entertainers, everyone promptly left the building. The offending suitcase resting next to the bin

But undeterred and not-to-be-cowed, we carried on merrily at the Eagle, of Watson-and-Crick fame.

Happily the suspicious suitcase emerged to be nothing more than that and revellers were able to return to the offices to dance late into the night. As Ayesha Vardag explained later to Cambridge News, "no power on earth can stop a Vardags party".

The new office, spearheaded by Cambridge-based director Arron Bortoft, has already garnered significant attention in the region. In Arron’s mind Cambridge was "an obvious choice" of location for Vardags:

"Not only because of its academic roots, but the recent explosion of industry and commercial growth. There are clients from many backgrounds with a variety of skill sets. The science park and tech sector give a cutting edge and progressive feel to the city. Vardags fits with this ethos and bring a modern approach to law to a thoroughly modern city, despite its traditional reputation."

The move was also a personal one for Arron, who moved to Cambridgeshire five years ago from London for a quieter life after his daughter was born. "I knew the area, having spent a lot of time here as a child, and followed good friends from London out here", he went on, "it felt like a comfortable move".

An alumna of Queens’ College, Ayesha was also delighted to bring Vardags’ blue-chip, family law expertise to the heart of Cambridge.

"I love the fact that we’re the only HNW law firm in the historic centre," she went on, "the offices feel like a private residence or particularly grand college rooms. We’re bringing our personal, bespoke approach to meet all our HNW/UHNW clients’ legal needs somewhere that feels like home."

Sir James Munby calls for divorce law change “as fast as sensibly possible”
This site uses cookies. Find out more. Continued use of this site is deemed as consent.   CLOSE ✖