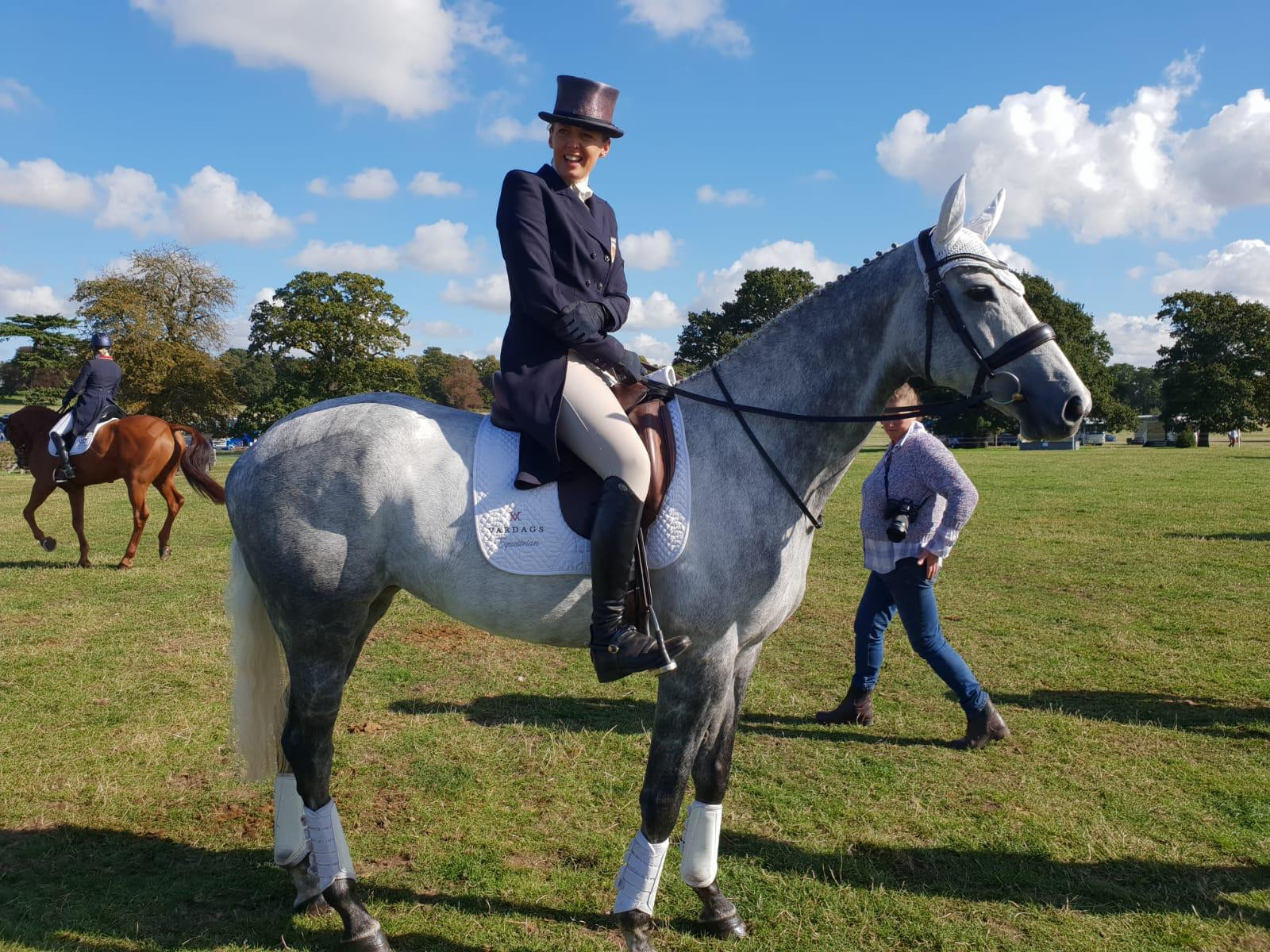 Osberton is known as the “fun one”. A popular international horse trials, it takes place late in the eventing season, at the end of September, and the riders enjoy it all the more for it.

Riders strive throughout the season to get to the British Eventing Young Horse Championships held at the event, including with Olympic riders coming through the ranks. Alongside the 4, 5, 6 and 7-year-old championships, Osberton also hosts a fiercely competitive one and two star competition.

While late September trials don’t always bask in sunshine. This one did. It was a beautiful Autumn day when the Vardags team left London at dawn to travel up to the Osberton Estate parkland in Nottinghamshire to watch Vardags Saratoga in her CIC**YH dressage for the 7yo National Championships.

Saratoga was beautifully turned out by ‘Supergroom’ Charlotte Aitken, and kept cool and calm by rider Flora Harris. Despite some promising moments, tension got the better of the hot mare and she didn’t produce the work she was capable of. It became clear when the dressage finished that Flora was exercising heroic control over a very hot, wired Saratoga.

We had lunch with other horse owners and sponsors, kindly hosted in hospitality that day by Investec as fellow sponsors of team Harris. Flora Harris, funny, intelligent and animated, charmed the table, and her partner and showjumping expert Jeremy Scott kept everyone laughing.

After lunch Flora walked the course with us, with bulldog Olive and whippet Mavis in tow, explaining the pitfalls of each cross country jump, and the ideal line to take. As we went, we watched the young horses made their way around the 4yo cross country in their first ever eventing season.

Returning to sit out under the chill blue skies, most of the trade stands were packing up. British Polo gin however were just warming up. In another special treat, we sat on hay bales under bunting to learn to tell our genièvre from our old Toms in a gin tasting and history with British Polo Gin. Popular consensus treated their smooth, organic botanical gin by far the kindest in our historical journey through gin.

An Equestrian of Sport

More than a few in, we were ushered in to a marquee to watch ‘An Equestrian of Sport’ for the evening entertainment. Returning for a third year, the popular game has two teams battling it out: one from home, the other from abroad. Teams answer equestrian based questions including a 60 second round, picture board, and other challenges, but with the disruptive addition of the audience being able to buy points between rounds for either team.

A bit of good-natured cheating in this regard helped push up the donations for a very good cause.

All funds raised throughout the evening were in support of Wear Green For Jonty, to be donated to Jonty Evans Rehabilitation following the beloved Olympian’s devastating fall at Tattersalls International Horse trials in June this year.

While last year was riotous, this year was poignant with Jonty having been the winning Team Captain last year. Both teams made a valiant effort, with the flushed faces and gin refills of Team GB somewhat handicapping their attempt, leading them to miss such equine basics as “how many inches in a hand”. They were not to be sniffed at however, as the game raised over £7000 in an hour.

Suddenly the audience rose, row by row and frantic whispers gave way to cheers as Jonty himself entered the tent and made his way to the stage at the front.

Spectators openly sobbed. It made for perhaps the most memorable, and certainly most special Osberton ever.

Expansion and new hires at Vardags this Autumn

Divorce rates over the century
This site uses cookies. Find out more. Continued use of this site is deemed as consent.   CLOSE ✖