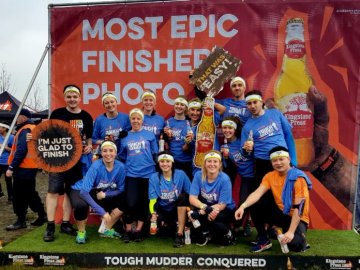 It’s not often you get kicked in the face by your colleagues, throw a top divorce lawyer over an eight-foot wall, or end up with a trainee’s trainer-print on your shoulder. But all these mishaps, and more, struck the Vardags team as they tackled a 5k Tough Mudder last weekend.

Three months after the foolhardy sign-ups, and with precious little training done since, thirteen members of the London office assembled in the Olympic Park for our own meeting with athletic adequacy. The fellowship, which ranged from directors to graduate trainees and took in both lawyers and business professionals were unified by one goal – to make it round the course and demonstrate the teamwork and determination for which Vardags is famous.

The happy band started strongly (in hindsight, perhaps too strongly) with a headstrong attack over the first kilometre and the hay bales which formed the initial obstacle. The promising start faded a little, as the next hazard – two angled, 8 foot fences – sucked their strength and reduced even the most graceful team members to a mess of flailing limbs.

With good spirits and a healthy dose of competitive aggression, the team ploughed through the following four kilometres. Nets were crawled under, fences were scaled, and wheelbarrows raced. They even conquered the Giant A-Hole – a huge netted a frame which took them thirty feet in the air.

Each hazard brought the team closer together, both literally and figuratively, as the adventurous cohort pulled together to help each other through, over and under whatever the course could through at them. Even when energy levels were lagging, the Vardags legion pulled together, mastering the final few challenges with human pyramids, pull-ups off other people’s shoes, and one very undignified slide down a quarter-pipe.

With a few final strides, the Vardags team crossed the line together – united by triumph. The mud-splattered champions downed a celebratory cider and retired to a local hostelry to further toast their success.

The escapade may have ended with the odd bruise to the body and the ego, but the team’s efforts show that with their ingenuity, enthusiasm and sheer bloody-mindedness, there is very little that can get in the way of a Vardagian.

Vardags' five left feet: the firm's football fiasco in Cambridge
This site uses cookies. Find out more. Continued use of this site is deemed as consent.   CLOSE ✖