Our Old Bailey office: a room with a view 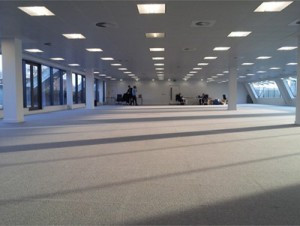 The beginning of our Old Bailey office

Following our continued successes, we are bursting at the seams with new talent and are pleased to announce that we are expanding from our current location into additional office space further down the Strand. Having been spoilt by Bell Yard’s intimate position right next to the Royal Courts of Justice, with privileged views of its intricately detailed neo gothic facade, clearly our new office had to be placed somewhere equally fabulous. And so our new home will also benefit from the wealth of legal architecture in London, aptly placed adjacent to the Old Bailey, London’s criminal court since 1673. Our new location sets us right in the heart of the old city of London. We are sited on Old Bailey, following the line of the original fortifications of the city to which the street owes its name, abutting a remaining section of the original Roman city wall. Between us and the neo baroque courthouse is the discrete but infamous ‘Warwick passage’ which travels under the site of the old prisons. The passage was a popular getaway route for prisoners trying to escape into the nearby ecclesiastical housing that serves St Pauls Cathedral. Of an evening, nervous groups of tourists can be seen huddled in this alley, on a ‘ghost tour of London’. Here they are regaled with tales of public hangings that took place here, and the Ghost of Tudor Lady Alice Hungerford. This jilted wife punished her unlucky spouse by poisoning him, and met her own grizzly end by being boiled alive. Her ghost can be seen wandering the site of Greyfriars monastery, Warwick lane and Amen corner.

We are moving into 10 Old Bailey, home to distinguished companies like the World Gold Council, Rosling King and Majedie Asset Management. The building is a showcase piece of architecture by Sidell Gibson Architects who were the executive architects of One New Change. The building combines a modern and fresh glazing scheme with stone historically prevalent in the area, a graceful nod to the traditional, incorporating a strictly rhythmic façade reminiscent of the developments of Georgian London. The light, creamy coloured Portland stone façade rises up and sweeps back majestically, in reference to the curved lines of the adjacent neo baroque courts. Clean, crisp windows project out through the stone work, as a modern interpretation of the ‘Juliet balconies’ found in a theatre auditorium, imagining nosey onlookers observing the nefarious goings-on the street below. The detailing of these bold windows is deceptively simple. There is no visible external frame encasing the projected glass, and internally each window box is supported by a neat steel mullion support structure. The overall effect is of a harmony between traditional materials and a bold modern statement.

Once you pass through the slick marble lobby and travel up to the top floor, you will see why we fell in love with this space. As the lift doors open and you step into the sunlight on our floor, you are presented with an awe inspiring, unimpeded view of St Paul’s Cathedral. Seen from a mere 200m away, from an indulgent vantage point over the rooftops of everyone else, Sir Christopher Wren’s world famous dome is a sight to behold. An engineering marvel of its time, it is an exemplar of forward thinking, innovation and grace. As the sun rises in the south east behind St Pauls, the building’s profile stands out in sharp relief against the morning sky. The sun shines through the open bell towers, highlighting the delicacy of the clusters of columns supporting the cupola. Whist having a morning coffee on our private terrace one can also view the sun shining through the tip of the Shard in the distance, exposing the intricate filigree of the structural steel usually hidden by the smooth glass façade. Our ruling panorama also takes in the London Eye, Pugin’s Houses of Parliament, and Wren’s unmistakable ‘wedding-cake’ tiered spire of the journalist’s church, St Bride’s of Fleet Street. With this view as daily inspiration, is there nothing that Vardags can’t achieve?

Our fit out is being designed by the fabulous Chu Associates, who provide bespoke design to exclusive clients. The design of the office will include a series client meeting rooms along the east side, with doors out onto the terrace and the view over St Paul’s. The staff area will be divided into an open plan area with a row of glazed offices looking out over Old Bailey street. We will keep you updated as the fit out continues, watch this space to see the hottest young office in London develop.