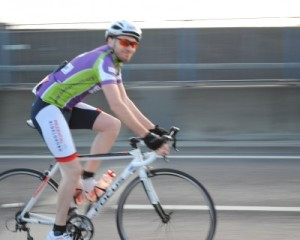 On 4th August 2013 Vardags’ barrister John Oxley successfully completed the Prudential Ride London 100 – a 100 mile cyclo-sportive snaking through London and Surrey. The event saw around 16,000 cyclists take part including London Mayor Boris Johnson, Olympic rower James Cracknell, and rugby player Matt Dawson. The riders followed the route of last year’s Olympic Road Race, setting out from the Queen Elizabeth Olympic Park before heading through Central London and off to tackle the climbs of Leith Hill and Box Hill. The return leg took them through Wimbledon and Chelsea, before culminating in a grandstand finish on the Mall.

Despite suffering a minor crash, and mild concussion, John managed to complete the ride after 7hours and 41 minutes of riding. In taking part he raised over £700 for Samaritans. Speaking after the event, John said ‘This was a fantastic day all round, from watching the sun rise over the Olympic Park to sprinting down towards Buckingham Palace. Riding on closed roads, with no cars, is something usually only the pros experience and made for many great memories. I am particularly proud to have done all this in support of Samaritans – an important and much needed charity’. He went on to add ‘I am particularly thankful for all the support and donations I received from the Vardags team. Knowing everyone at work was behind me certainly helped me overcome the aching legs towards the end’.

John is already planning to enter the ballot for next year’s ride, and hopes that next time he can finish without crashing.

Social media: is it a threat to your marriage?

Is a happy marriage the key to becoming a billionaire?

Divorce and women’s rights: a history
This site uses cookies. Find out more. Continued use of this site is deemed as consent.   CLOSE ✖