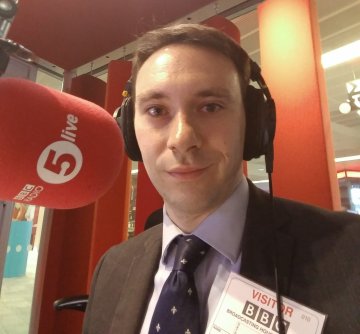 After appearing on Radio 5 live last Wednesday in the wake of the Tini Owens divorce case, Vardags barrister and strategy associate John Oxley was welcomed back to the studio to discuss the decision to ban the cross-examination of victims by their alleged abusers.

As ’5 live Daily’ presenter Sam Walker states, the ban will be introduced as part of the new Prisons and Courts Bill, amidst mounting pressure to prevent victims of domestic violence being retraumatised in the family courts.

John opens his interview by explaining that, under Practice Direction 12, a person accused of domestic violence was allowed to cross-examine their victim in court, and it was up to the judge’s discretion to "step in if necessary", raising "all sorts of issues of impartiality and human rights concerns" and, most worryingly, putting "victims under the horrible pressure of being questioned in court by their alleged abuser”.

Last December, President of the Family Division Sir James Munby, sternly criticised this process, stating that, in this respect, the family just system “lags woefully behind” the criminal courts.  He called for reform “as a matter of priority”, whilst acknowledging that this requires primary legislation and is therefore a matter for parliament.

Such change is now on the horizon, as John explains:

What this change means is that the judge will be able to make a specific order where the alleged abuser is given legal aid specifically to be represented by a solicitor or, more likely, by a barrister for that cross-examination, and so they will no longer be able to ask those questions themselves, they will have to have a lawyer who has been trained to do it.”

When asked how common litigants in person are in the family courts, he responded that roughly 80% of family court cases  will have one or more of the parties acting in person without a lawyer, but cautioned that this is often not a "matter of choice", as "it is very hard to get legal aid for family law cases unless you are the victim of domestic violence".

The Prisons and Courts Bill is significant because judges will now be able to specifically order that legal aid funds be made available to provide alleged perpetrators of domestic violence with a solicitor and prevent the trauma of victims being confronted by their abuser in court.

Joining John in the studio was Jane Keeper, director of operations at Refuge, a charity which provides support for women and children experiencing domestic violence. She stated that Refuge "really welcomes the bill"and looks forward to "working with the government to shape it and ensure that the needs of victims are better taken into account”.

You can listen to the interview in full here. The segment begins at 2:18:30.

Leader of Australia's populist One Nation party calls for compulsory prenups
This site uses cookies. Find out more. Continued use of this site is deemed as consent.   CLOSE ✖