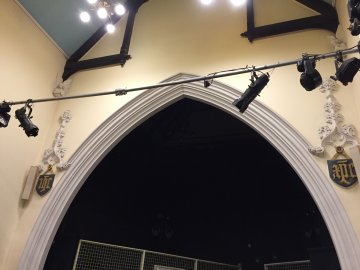 In September 2017, a group of Vardagians took on a near-400 mile fundraising cycle ride in aid of Intermission Youth Theatre, an arts-based youth mentoring organisation that empowers young people who are at risk of offending, ex-offenders, or lacking in opportunities, to improve their lives through theatre. IYT takes Shakespeare as its inspiration, reimagining the works of the Bard for a contemporary world. We’re proud to support such a worthy organisation and jumped at the chance to see their latest professional production.

“A heavier task could not have been imposed /Than I to speak my griefs unspeakable”.

Formidable opening lines for a comedy. The stage was black and sparse. A scaffold was the only set piece, stark against the Gothic grandeur of the proscenium arch. Packed into the nave of St Saviour’s Grade II-listed church, the audience sat like an eager congregation, albeit one clutching plastic cups of white wine. Eleven performances into the four-week run of Intermission Youth Theatre’s annual production, the cast had seemed anything but fatigued when they rushed backstage to get in position—unruffled by the traffic jam that had left them racing against the clock for curtain-up. Still struggling for breath after our madcap dash through Knightsbridge—during which we’d battled against the finger-numbing cold to retrieve the directions on our phones and cursed the infernal Central line for the inordinate delay to our journey—the seamlessness with which the cast slipped into their roles left Vardags’ press contingent feeling more than a little sheepish. When the lights came down, however, we were immediately plunged into the world of Double Trouble, a contemporary reimagining of Shakespeare’s The Comedy of Errors. It was immediately apparent that this retelling—riotous as it was—suffused the farce with a darkness that the original text only gestured at. Fingers thrust through the cage-like bars of the set, which glinted yellow and grimy under spotlight. Border patrol officers barked all too customary commands.

“Go back to where you came from!”

Refugees stood in a line, making impassioned pleas to the guards who would determine their fate. Only one man, conspicuously dressed in Elizabethan garb, was granted entry after moving one of the guards with his tragic story. Played masterfully by Intermission veteran Baba Oyejide, Aegon, once a father of four, believed two of his children to be long-dead victims of the civil war that ravaged his native land for decades. In order to avoid meeting the same fate, the remaining two siblings, Anthony (Donnavan Yates) and Dominique (Lucie Adewusi), have now sought asylum on British shores, where their father is desperate to catch up with them. Unbeknownst to all three, the two long-lost children (played by Samuel Awoyo and Sharai-Raven May) are also there, having successfully resettled in London years before. Bearing the same names and a more than striking resemblance to one another, the four siblings proceed to cross and recross each other’s paths without realising it. The ensuing chaos is marked by accusations of infidelity, insanity and a stolen weave as the main players try and fail to make sense of the mayhem. Much of the performance’s comedic value is derived from the juxtaposition of Shakespearean verse with contemporary urban colloquial speech. Though this communication gap gave rise to innumerable mishaps, neither mode of discourse was elevated above the other. Instead, the cast went beyond a flat contrast between Shakespeare and street slang, closing the gap between the two with their mastery of verse. Largely maintaining iambic pentameter, they found candour in the more florid Shakespearean passages and laid bare the poetry of contemporary, urban utterances. You couldn’t help but feel that the cast were revelling in every moment, made manifest in some well-chosen comedy pairings and, more broadly, in the obvious camaraderie amongst the 25 strong company as a whole who in an after-show discussion described IYT as “pure love”, and “family”. As with the final execution of the play itself their enjoyment was evidently undercut with a keen awareness of the socio-political issues invoked by director Darren Raymond. As otherwise fluffy comic scenes unfolded, those grimy fingers from behind the bars of the scaffold could often be discerned in background. Cloaked in shadow these figures would often comment on the drama as it unfolded in a manner reminiscent of a Greek chorus, and served as a reminder of the plight of refugees kept out in the dark. “The chorus was a really powerful way to represent people who don’t have a voice”, a cast member explained. A review from the company’s patron, the renowned actor Mark Rylance, noted this empathic force, finding the production to be “played with enormous feeling for the situation of refugees and the lives of those without a home” and praised the production more generally as “a brilliant, hilarious, imaginative adaptation of Shakespeare’s The Comedy of Errors”. A warm reception from the audience made way for similar plaudits: “inspiring“, “insightful production“, “one of the best Youth Theatre shows I’ve seen“. The enthusiastic applause was testament to the creative vision of Darren Raymond and a wry, engaged and perceptive performance from a talented cast. We can’t wait to see where they take us next year.