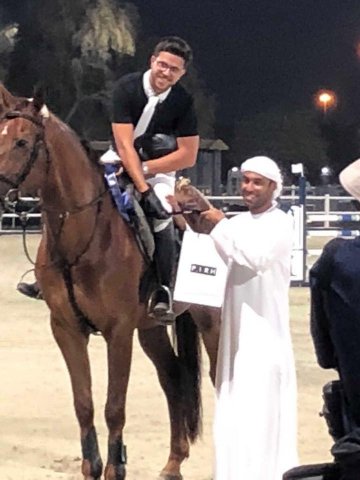 Vardags Equestrian enjoyed an exceptional double victory last week in the Nationals in the UAE. Both champion showjumper Ahmad Mansour and young, dedicated eventer Helena Vardag-Walters brought in first place honours at the the Gulf Elite tour held at the Dubai Polo and Equestrian Club.

Helena made her nationals debut with Atletic de Vardag on Thursday and Friday, placing first after riding with one of only four clear rounds in the class.

It was a laudable victory, even more so given that Helena typically competes with Fuego de Vardag, and the win has publicly established the rider as one to watch.

Ayesha Vardag praised Ahmad for his training both of Helena and the excitable Atletic de Vardag, a 17hh warmblood. "Hot, strong and not particularly used to showjumping", Ahmad has recently been working to develop the eventer’s showjumping skills. Atletic’s performance last week would indicate that his endeavours have paid off.

Ahmad winning the national small tour again is the latest and largest in a blaze of victories he and Estoril have seared across the UAE’s equestrian scene, including placing first last month at the Abu Dhabi National Show and the EEC Hunter Trials.

His string of incredible performances more than merits the epithet he earned from a commentator at the nationals as "one of the fastest men in the UAE".

Georgina Hamblin tells Grazia to mind the pay gap
This site uses cookies. Find out more. Continued use of this site is deemed as consent.   CLOSE ✖