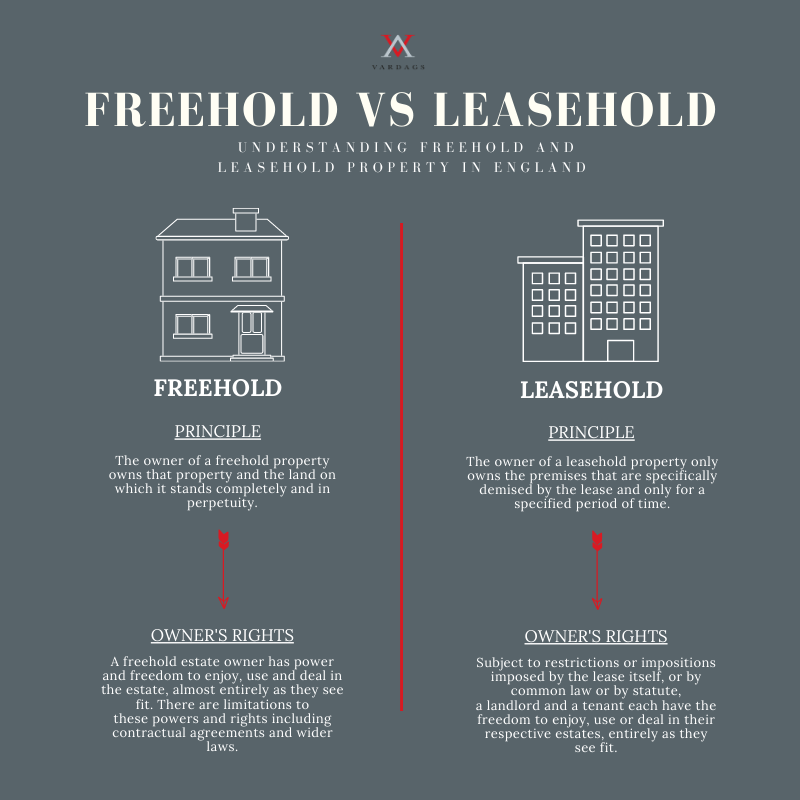 If you are a considering buying a property in England it is important that you understand the differences between freehold and leasehold property under English law.

Leaving aside Commonhold (which has had very little uptake since its introduction in 2004), there are two different forms of legal ownership of property under English Law – either freehold or leasehold.

Owning property through a lease is a convenient arrangement, particularly for buildings that are divided into separate units, with common parts, and which are occupied, or capable of being occupied, by different individuals. By granting leases of units, a landlord is able to create a manageable regime which ensures that the common requirements of a building and its occupiers are adequately catered for (e.g. by imposing rules and responsibilities relating to: building insurance, repair and maintenance of structural parts, decoration and maintenance of common parts, provision of services and peaceful enjoyment).

The law relating to property in England is extremely complex and has evolved over hundreds of years of developments in the common law (i.e. evolved through the courts) and statutory law (i.e. legislation). This article is intended to provide a simplified summary of the modern-day position.

Excluding Commonhold, there are only two estates in land which are capable of subsisting or of being conveyed or created at law:

A freehold estate is the most substantial estate in land.

There is an ancient maxim: “cujus est solum, ejus est usque ad coelom et ad inferos”, which means that the owner of a freehold estate is presumed to own everything “up to the sky and down to the centre of the earth”.

However, there are of course necessary modern limitations to this maxim and now a freehold estate owner’s rights in the airspace above and ground below a property extend only to such height and depth as is reasonably necessary for the ordinary use and enjoyment of that property.

The rights of a freehold owner

A freehold estate owner has power and freedom to enjoy, use and deal in the estate, almost entirely as he sees fit; for example, he can sell, lease, mortgage or grant rights in or over it. There are, however, limitations to these powers and rights, including:

Originally, leases were seen as mere personal contracts (rights in personam) but are now firmly established as rights of property (rights in rem) and are in the category of "estates". By their nature, a leasehold estate is inferior to a freehold estate but, as a practical matter, depending on its characteristics, may be just as secure and as valuable as any freehold estate.

A lease is the grant by a person (the landlord) of a right to another person (the tenant) to the exclusive possession of property for a determinate term.

“Exclusive possession” and a “determinate (i.e. identifiable) term” are two essential characteristics of a lease:

The distinguishing characteristic, by contrast with a freehold estate, is that leasehold estate must have a duration which is certain in time. There is no minimum or maximum term required, but the term must be capable of being determined.

Typically, leases are granted for fixed terms (e.g. 99 years or 999 years), but equally they can be granted indefinitely with the capacity to be terminated on notice, on reaching an identifiable date or on the happening of an identifiable event.

Once a lease has been created, all rights, benefits, and obligations created by or arising from it will pass to successive owners of that lease.

The rights of a leasehold owner

Subject to restrictions or impositions imposed by the lease itself, or by common law or by statute (in the same way they apply to freehold), a landlord and a tenant each have the freedom and discretion to enjoy, use or deal in their respective estates, entirely as they see fit.

Unless prohibited by the lease, a leasehold estate can be dealt with by the lessee just like a freehold estate: i.e. it may be transferred, underlet or mortgaged, or interests can be granted out of it.

A leasehold estate owner continues to own that estate absolutely until the lease term expires or it is otherwise brought to an end (in accordance with the operative provisions of the lease); at least, that is, until they die, or until they dispose of it during their lifetime.