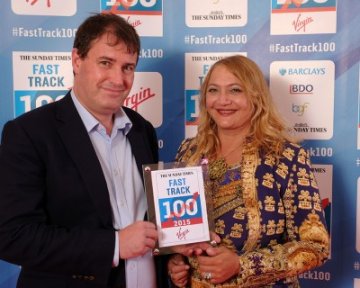 Last December, Vardags received the thrilling news that The Sunday Times Virgin Fast Track 100 had listed us as the 46th fastest growing company in the UK. It was especially exciting to learn that we were the only law firm who had made the cut.

Therefore, when we received our invite to the network’s 19th annual conference and dinner, we seized the opportunity to get to know fellow rising stars from the business world and gain insights from some of the country’s most inspiring entrepreneurs.

On Wednesday 29 June, our President Ayesha Vardag and Director of Strategy Stephen Bence cheerfully journeyed to rural Oxfordshire for the event, where they were welcomed by the legendary Sir Richard Branson.

Sir Richard participated in an audience Q & A, where he emphasised the benefits of a private company having a human “face”, and attributed his success to mastering the “art of delegation”:

“The most valuable thing that I learnt early on was the art of delegation, and there are so many business leaders I know who are not good at delegating, and they want to do it all themselves. And yet if they could just find that time to find someone better than themselves, not necessarily better at all things but somebody who could, on a day-to-day basis, run the company, they could then be freed up to lead the entrepreneurial push into new areas.”

David Buttress, CEO and co-founder of JUST EAT, was one of two keynote speakers for the conference. On the current climate of post-Brexit uncertainty, he offered some reassuring words: “entrepreneurs…what ever happens, you just find a way”.

Rosemary Squire OBE, founder of the Ambassador Theatre Group focused her keynote speech on the importance of having a clear vision in business; “invest plenty of time in that vision, give it some colour, give it some texture, make it three-dimensional”.

The speeches and a panel session on “doing business differently” were followed by drinks, networking and the awards dinner itself. The evening closed with a high-stakes Virgin charity auction and, of course, the awards ceremony.

We couldn’t be happier with our award and extend our deepest thanks to The Sunday Times Fast Track 100 for hosting such a fabulous event. Congratulations all the winners -we do hope to see you again next year.

Lawyer switches sides in $100m family law dispute
This site uses cookies. Find out more. Continued use of this site is deemed as consent.   CLOSE ✖