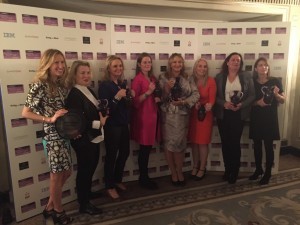 Ayesha Vardag has won the NatWest Everywoman Award for 2015. The prestigious awards, which are in their 13th year, celebrate the achievements of entrepreneurial women from across diverse fields.

Categories are open to women who have just started new enterprises, all the way up to women whose businesses have been going for more than 12 years.

Ayesha has been named their Woman of the Year because she is “changing the world of law” and challenging the male-dominated status quo.

Among Ayesha’s better-known achievements such as her Supreme Court win in Radmacher v Granatino, the Everywoman judges favoured her pioneering commitment to flexible working for parents and her ground-breaking maternity/paternity policy.

The awards ceremony was held at the sumptuous Dorchester Hotel, where Ayesha and Vardags managing director Catherine Thomas were honoured to be in the company of so many high-achieving women.

The other winners were as follows:

Heather Rabbatts CBE, who won The Spirit of Everywoman Award, whose varied career has “changed the landscape for women in business in the UK”;

– Mo Constantine OBE, founder of Lush Cosmetics, who won the everywoman Ambassador Award for being such an inspiration to young business women;

– Tamara Arbib, who was presented with The Brand of the Future Award for her promising new project, Rebel Kitchen;

– Sarah Pittendrigh won the Aphrodite/Mumpreneur Award for founding a business, Simply Bows and Chair Covers, while raising a child;

– Jen Hyatt accepted The Iris Award for using technology in an innovative and disruptive way with her company, Big White Wall;

– Clare Johnston won The Athena Award for her company, The Up Group;

Many congratulations to all the winners, and thanks to the team at Everywoman and At NatWest, who sponsored the awards.