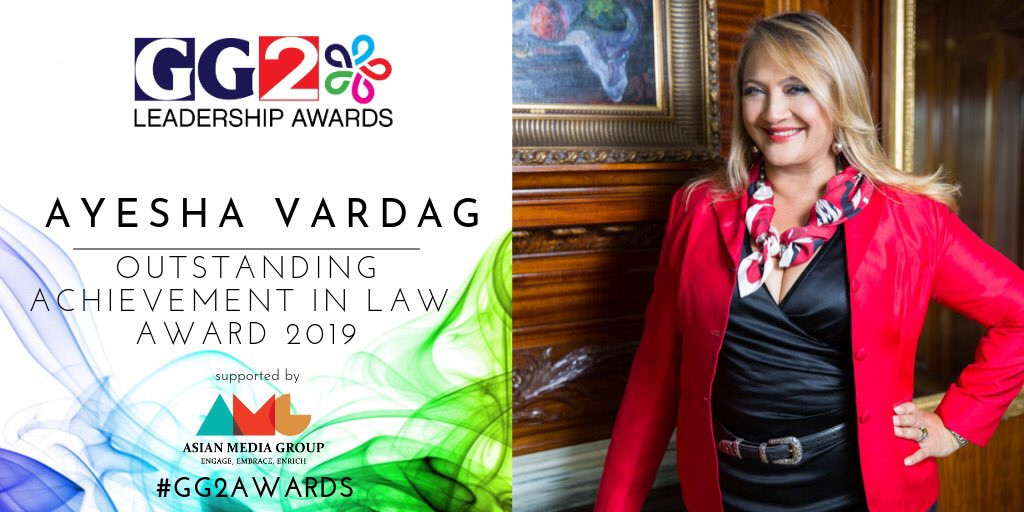 Ayesha Vardag has been awarded the Outstanding Achievement in Law Award at the illustrious GG2 Leadership Awards.

Ayesha was celebrated alongside luminaries at the very top of their respective fields from the worlds of business, media, and academia. Other winners rubbing shoulders on the night included Sajid Javid, Chancellor of the Exchequer, and Viswas Raghavan, the CEO of J.P. Morgan.

"I’m truly proud and grateful to receive such a distinguished accolade for the work that has been the passion of my life."

Ayesha was introduced as ‘the diva of divorce’ and the ‘queen of marital breakdown’. Her “unsurpassed reputation as Britain’s leading divorce lawyer” arose, they said, from her “proven ability in the courtroom, commercial savvy and passion for cases informed by personal experience.”

The award recognised Ayesha’s trailblazing career as a whole as well as individual cases which broke new ground in the English Courts. These included changing English law to make prenuptial agreements enforceable and securing a first of a kind Court of Protection Order set to inspire major changes in how fertility cases are treated moving forwards. The GG2 Power List, launched the night of the awards also gave mention to Ayesha’s tireless lobbying work, including her successful campaign to put no-fault divorce on the legislative agenda.

“I’m truly proud and grateful to receive such a distinguished accolade for the work that has been the passion of my life,” Ayesha said in response.

Speaking via video link as her son Jasper collected the award, Ayesha explained why an award celebrating both diversity and excellence was so meaningful to her.

"I have endeavoured to build a law firm based on real meritocracy, as a Pathan woman and a divorced single mother initially on her own and having faced many prejudices, from nothing to a leading position in the face of a very closed establishment. I have fought to drive forward law and social reform in this country both by winning ground-breaking cases and by shaping opinion. I have tried to serve not only my clients but also our society."

She finished by describing why it was so apt that her eldest son Jasper should be there that night, having been with her every step of the way, and now undertaking his legal training at her firm so that he may carry the torch onwards with her.

The award is an extraordinary testament to Ayesha’s career and the many people whom her work has impacted.

You can watch her acceptance speech in full below.