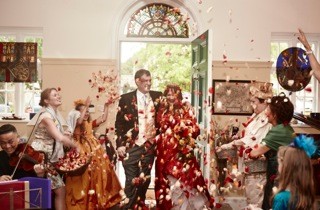 When you’ve been living together for five years and you’ve both been married before, when you’ve reached ‘un certain âge’, some might think that remarriage becomes irrelevant. Certainly, for a long time we felt that it was unnecessary, even perilous, that we knew we wanted to stay together and ‘if it ain’t broke don’t fix it’.

And of course, the great irony is that we both work in divorce law. I moved into that field when my own divorce lawyer hired me and set up the firm alone in my spare room to support my daughter. I was the poster girl for getting on with it alone after divorce and not getting married, ever again. No remarriage for me! I think I had become very reluctant to believe in long-term love. And Stephen, also divorced and living with me, had been drawn from his McKinsey background into Vardags to spend his time ferreting out hidden assets in marriages and finding their true value, and also living and breathing divorce in all its ghastliness. Neither of us wanted to get into any of that.

I don’t know what changed, exactly. I think over the years our relationship got deeper. We had troubles in our lives and we got past them together and that made us more important to each other. Immensely difficult and challenging as we both are, we somehow fitted together and made not just a partnership but a family.

The family element was fundamental. We both brought our children from previous marriages, five of them, ranging from 10 to 19. We felt very strongly that we wanted to build a solid base for them. Someone told one of my stepchildren that I wouldn’t be a stepmother to them unless I married their father. We corrected them, but we felt that they would feel safer if we married – that they’d feel it was more worthwhile investing in our family – in us and in each other. So we started talking about it, with them and with each other, but didn’t really feel the push.

But then one morning, after a turbulent time, after great adversity, Stephen took me in his arms and told me how he felt about me. Only then, I think for the first time, I realised that the man I was living with really loved me, with all my faults, that he saw my every weakness as the flip side of a cherished strength, that he was an exceptional, unique, extraordinary individual. That he didn’t want me to be smaller, in any way at all – not thinner, not quieter, not less opinionated or successful – he wanted me, myself, as big and colourful and forceful and thoughtful and insecure and vulnerable as I could be. That I loved him in a different way from any other love. And needed him. And wanted to give the bond between us as much public and legal and spiritual weight as it was possible to give. And that was when we decided to marry.

We wanted our marriage to be deeply personal. We married in Winchester Cathedral, next to our house, had the reception at home, and told all our friends to come with their children and loved ones so no-one was left out – 300 people in an ancient house and a giant Indian tent.

We signed our prenup with friends beforehand and our postnup at the wedding before all our friends, just before cutting the cake. Particularly having prenups as such a fundamental part of my life, after my winning Radmacher, we always knew we wanted to agree our own affairs between us personally rather than handing over a blank cheque for our futures to the court or other lawyers.

Our wedding list, rather than the usual household objects (of which at our advanced stage of life we’d accumulated far too much already), was experiences. We asked for moments in the honeymoon, which was a pilgrimage to Hawaii to see where Stephen had discovered how stars are made in his astronomy PhD field work. We made a big list of all the things we most wanted to do on our trip, with pictures and descriptions, and people chose what they wanted to give us. So rather than dishes and tablecloths we had a trip up a mountain to his astronomy station, a special dinner, a trip to see waterfalls, swimming with dolphins, etc. We took pictures at each of these and sent them back to the guests who’d given them, so they were part of the happiness they’d brought about. It was really lovely – somehow it meant much more than just having things.

One of the most fundamental things we did differently was involving the children in the marriage bond. We changed, with the support of the lovely Dean of the Cathedral, James Atwell, a part of the wedding ceremony to include the children. There was no question of anyone ‘giving me away’. We wanted the symbolism that we came there as equals, but also that we came there with our children. So we walked up the aisle side by side, with our five children walking behind us. The Dean asked “who bringeth this woman, and my children answered “We do”. Then, “who bringeth this man” and Stephen’s children answered “We do”. From that moment, we made clear it was the free union not just of two individuals but of two families.

The rain poured down and everyone was drenched, but happily furnished with Vardags umbrellas and a short walk home through the cloisters. They showered us with rose petals as we came through the door. The reception was wild – free-flowing and based around dancing- starting with Viennese waltzes, in which Stephen and I managed to kick off with a solo spin, then a crazy ceilidh band with manic reeling from grandmothers to toddlers, then Bollywood demonstrations and dancing and finally a DJ and music which only finally concluded as the sun was coming up.

It was one hell of a wedding. Now, now the challenge, the great prize, is the marriage.