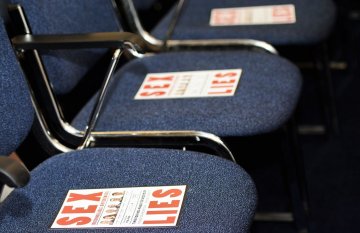 Ayesha Vardag launched the Campaign for Family Law Reform this month with a fringe event at the Conservative Party Conference. Entitled “Sex Lies and Irreconcilable Differences”, the event was a panel discussion of whether the time is right for no-fault divorce.

Representing the FLR, Ayesha made the case for no-fault divorce as a family positive change, arguing that if marriage is seen as a trap “then it is the end of marriage”. She was supported in this argument by controversial commentator Katie Hopkins. Thomas Pascoe of the Coalition for Marriage, a Christian pressure group argued against the proposed change to the law, whilst Robert Courts MP, presented the government’s rather neutral approach to the issue. The panel was chaired by LBC presenter Nick Ferrari.

The evening was one of lively debate, with Thomas Pascoe valiantly defending his position in the face of Ayesha and Katie’s opposition. His point, however, that fault based divorce protected the vulnerable was rejected by Ayesha, who argued that more often it was the intimidated party who was reluctant to initiate a divorce if it meant acrimony.

The event proved to be a popular feature on the hotly contested fringe circuit. Guests arrived over an hour before the evening was due to start and, despite conflicting with a number of high-profile events, the FLR event attracted a capacity crowd.

The crowd was duly entertained as the debate panel exchange barbs, including the odd off-colour joke. Beyond the badinage, however, each speaker engaged with the serious issue at the heart of this debate – whether it was right for the state to require someone to prove “fault” to obtain a divorce.

A straw poll at the end of the night suggested the room was divided – with a slender majority in favour of reform. The engagement both at the event and on social media, however, suggests that the FLR campaign has increased awareness of the need for no-fault divorce and could provide a valuable launchpad for reform.

Curiosities of common law marriage
This site uses cookies. Find out more. Continued use of this site is deemed as consent.   CLOSE ✖