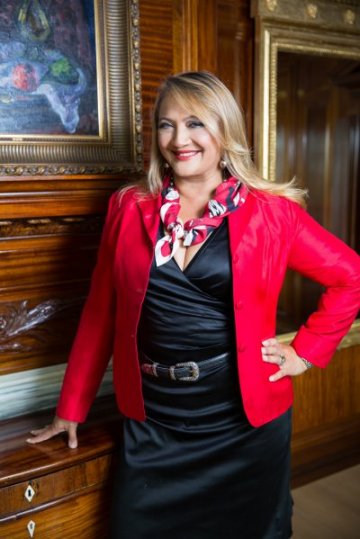 On 2 October 2013 Ayesha Vardag returned to the ITV studios for her second session on the couch at This Morning, having impressed the producers and presenters on her inaugural appearance.

She joined employment specialist Claire Dawson from Slater & Gordon and defence lawyer Nick Freeman of Freeman & Co to answer viewers’ legal queries. On this edition of the show, Ayesha was called upon to advise two viewers.

In the first case put before her, the viewer was encountering difficulties extricating herself from a moribund marriage. She had been separated from her husband for seven years and actively seeking a divorce for five. Her estranged husband lives in the marital home and wants to take on the mortgage, but had asked her to pay half the mortgage costs even though she no longer has access to the house. She is aware that it is a joint debt but she feels that her husband has drawn out the divorce for much longer than necessary; he also has a lot of business debts that predate the marriage for which he wants her to be responsible.

"In principle you could have all sorts of arguments about the fact that these were debts to do with companies from before the marriage, about the fact that these are mortgage arrears that she owes but he’s had the benefit of the house…the fact is, the courts won’t care. They’ll look at what’s there and they’ll carve it up between them in a way that is going to meet both their needs, unless there is a lot more money than there seems to be. They’ll also look at their partners’ money – any money belonging to anyone they’re living with – and they’ll just make a very broad-brush redistribution. It’s as simple as that, and she should try to get on with it as well. She should push this through, take some forms to the court and make her own application if she has to."

In the second case, the viewer split with her boyfriend three months ago but had previously taken a loan for him last November so that he could buy a car. They had a verbal agreement that he would pay back £100 per month. However, since splitting, he’s kept the car and still owes £700 for the rest of the loan, which the viewer is still paying. She wants to know: does she have a chance of getting her money back?

Falling slightly outside the realms of family law, Ayesha was still able to advise:

"This is straight-up contract law, so you just have to look at what the legal relationship between them was. The fact that they were boyfriend and girlfriend means that it’s a little bit more difficult to prove this is a legal agreement, but you can: the fact that he was paying back would indicate that. It’s fine to have a verbal agreement; an oral contact is just fine. There’s just a problem evidencing it, but the fact that she made the payment and he’s been making the payments back would indicate that there was an agreement, so she’s got a pretty strong argument on that. What she’s got to do in practical terms is write to him, set it all out, say “if you don’t pay back what you owe me then I’m going to bring a claim against you”, and then she can go and make that claim herself if she wants to. She can bring it in the Small Claims Court and she can even do it using Money Claims online."

Research spells happiness for divorced women
This site uses cookies. Find out more. Continued use of this site is deemed as consent.   CLOSE ✖