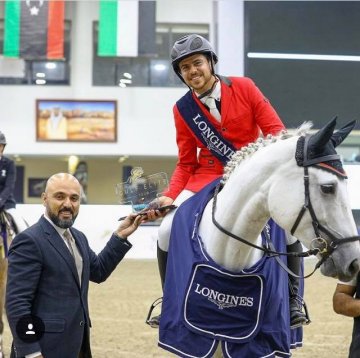 Last week, Vardags Equestrian’s seasoned rider Ahmad Mansour excelled at the Gulf Elite Tour in Sharjah, UAE. Competing in the CS12* on both the majestic Ficànka de Vardag and Estoril de Vardag, Ahmad’s success has shown that the momentum of Vardags Equestrian cannot be underestimated.

On Friday 26th January, Ahmad rode ‘princess’ Estoril de Vardag to victory, proudly taking first prize in the 135cm Speed Class. The pair galloped elegantly around the arena, cooly flying over the 1.35m obstacles to finish comfortably before the 120 second limit. Ayesha Vardag, delighted with the result, has referred to the ride as “dynamite”. The previous day, Ahmad and the snow-white Ficànka de Vardag also wowed onlookers at the 125cm class.

However, this brilliant achievement is not the only success that Vardags Equestrian’s Dubai-based rider has had in recent weeks. At Al Shira’aa International Horse Show CS14* in early January, Ahmad placed third on the first day then came a jubilant second on the final day in the 130cm class. Following this, Estoril de Vardag was awarded third place in the 130cm Speed Class at the Dubai Show Jumping Championship CS12* on 19th January.

Hot on the hooves of these winter wins, Ahmad, and indeed the rest of the Vardags Equestrian team, can now look to showjumping to success in the busy calendar of events upcoming this spring.