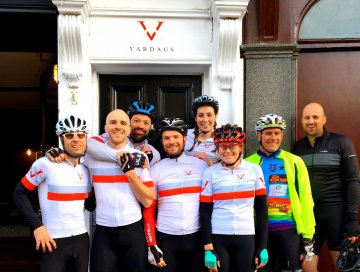 Five long days after setting off in Newcastle, our merry band of cyclists made their triumphant return to our London office on Monday 18 September. This was the finishing line of a 387 mile-long cycle tour, which saw the team speed past the Angel of the North, pedal through the Peak District and cross the cobbled streets of Cambridge before hurtling back into the Big Smoke.

This was more than simply an opportunity to work those quad muscles and sample some of England’s most idyllic scenery: the ultimate goal of Le Tour de Vardags was to raise money for a very worthy cause.

Every penny donated by our kind sponsors will go to Intermission Youth Theatre, a pioneering arts-based youth mentoring programme that works with young people from across London who are at risk of offending, ex-offenders or are lacking in opportunities.

IYT takes Shakespeare as their inspiration, drawing on the enduring relevance of themes such as knife crime, gang warfare, postcode rivalry, jealousy, love, bullying, and rage, and reimagining the playwright’s work for the present day. In keeping with the spirit of the occasion, our peloton spurred each other on by reciting the Bard’s most iconic quotations along their journey—which the team happily live-tweeted along the way.

A wise man once prophesised that "the course of Le Tour de Vardags never did run smooth", and so it follows that the journey was not without the odd hiccup. Misquoted Shakespeare aside, a few hours into their first day, the team realised that contrary to their earlier complaints, their GPS had not been malfunctioning and they had indeed taken a wrong turn down a canal path, the mistake costing them an extremely vertiginous climb to get back on track.

The majority of rest of the tour progressed disaster free, with the team enjoying the spectacular natural scenery by day, resting up in quaint countryside pubs by night. The received many a hero’s welcome as, day-by-day, they passed by the Newcastle, Manchester and Cambridge Vardags offices where they were greeted by our regional teams. You can break his finger, but you’ll never break his spirit

Within five minutes of setting off from Cambridge on the last day of the tour, however, events took a dramatic turn. Paralegal Kate Williams collided with Head of Private Client Chris Hall’s back wheel, sending both the bike and Chris flying through the air and resulting in a broken finger for the latter.

With Chris forced to finish the trip by car, the rest of the team followed him on two wheels, arriving at the Old Bailey to rapturous applause and a prosecco reception. There they were joined by the lovely Sam and Sue from Intermission Youth Theatre for a well-deserved celebration. You can find our favourite photos from the whole tour on Flickr.

At the time of writing, we have raised £2605 -65% of our £4000 target. We are truly grateful to everyone who has contributed and passed on their good wishes so far. If you haven’t yet donated, don’t despair—we will be accepting donations until 18 October. So dig deep and let’s help IYT put on their best show yet!

Can your parents' marital status affect your legal rights?
This site uses cookies. Find out more. Continued use of this site is deemed as consent.   CLOSE ✖