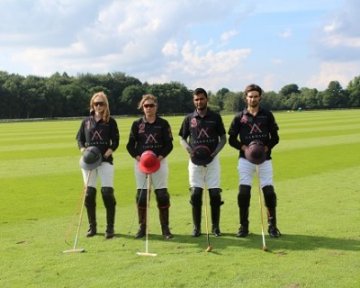 On Friday, Vardags polo team achieved a stunning victory over rivals Sea Island Coffee in the Archie David Cup. With an impressive 10-4 final score, Vardags won the game by one of the largest margins in the competition so far. We braved the Ascot traffic down to Windsor Park in sunshine-soaked Surrey to see the Vardags team in all their glory.

There wasn’t a dull moment throughout the game, with our Number One, Alice Gipps, scoring some truly impressive goals. We captured some of the action below: As the last photo suggests, spirits were certainly high after the results were announced! But before celebrations could commence, we took the opportunity to catch up with the team. Firstly, we asked Coach Gaston Lauhle for his thoughts on the game:

“The guys played really well -we scored 10 goals in 4 chukkas, that’s really good, and I have to say, it would be incredibly strange not to win a game with that score. I think the team have improved a lot, and luckily they are very experienced players who are used to following a game plan.”

When quizzed on the influence of his coaching on the final result, Gaston rather modestly responded:

“Even more important than technique or tactics is having players that can understand and respond to instructions -that’s much important than anything I can do.”

Next, we asked Alice how this game compared to the team’s previous outings. Her answer? Less “scrappy and brutal”. That’s not to suggest, however, that the game was devoid of heart-stopping moments, at least from a spectator’s perspective. Finally, we caught up with Sarah Wiseman, who shared her experiences of the tournament thus far:

“ very tough, it’s probably the hardest tournament in the country to win. All the teams are very strong, and I think there’s over 20 of them competing in this tournament. But it’s a lot of fun, we’re enjoying it. We’ve got a really nice little team going on, the team ethos is great.”

Following the Vardags polo team has certainly tempted us to swap office chairs for saddles and try our hand at the sport. So, before we let Sarah go, we asked her what the most important qualities are for a budding polo player:

“You to be tough, but you also have to be very patient. It’s very easy to get overexcited out there and want to try and do everything, but the point of polo is that it’s a team game .You have to rely on your team mates -the only way that you’re ever going to get to succeed in this sport is to get the whole team working together. So I’d say that the most important quality is to be a team player.” Sadly, in the end, Vardags’ triumph wasn’t enough to carry us through to the next stage of the competition. On Saturday, fellow League Seven team Sladmore/Twelve Oaks claimed a last minute win against Yaguara that secured them their place in the quarter finals, thus marking the end of our Archie David journey. Nevertheless, Vardags certainly bowed out in style, and we’re so pleased that our time in the competition ended on a high.

We are lucky to have had the opportunity to sponsor such a fantastically talented team, and couldn’t be prouder of their performances throughout the tournament. The very best of luck to Alice, Sarah, Lucho and Miguel in all their upcoming polo endeavours and we hope to see them donning Vardags’ signature colours again soon!

Reviews of children’s social care and surrogacy laws proposed by Law Commission
This site uses cookies. Find out more. Continued use of this site is deemed as consent.   CLOSE ✖