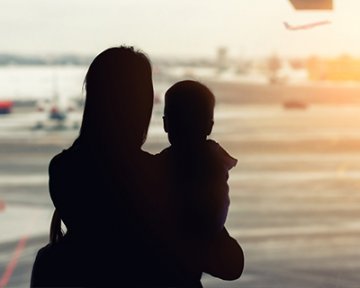 Earlier this month, Mr Justice Holman in the Royal Courts of Justice, heard a without notice application by a father for the summary return of his 3-year-old son who has been living with his mother in Angola for almost two years.

The father, who is a Spanish national, had a relationship with the child’s mother, a Portuguese-Angolan national, four years ago. The child ‘L’ was born in the UK in September 2012, and travelled with his mother to Portugal on 11 June 2014 when he was 21 months-old, before moving to Angola in January 2015. The child has not returned to the UK since, and so has been out of the UK for over half his life.

On 19 August 2015, the father’s application was heard by Mrs Justice Roberts, requesting an order for the immediate return of the child to England. It was ordered that the father had permission to proceed with his application but that it needed to be supported by relevant evidence. The application was therefore stayed until such a time as evidence could be presented.

However, although the applicant father submitted a signed witness statement and supporting evidence on 21 August 2015, his solicitors did not ask for the stay to be lifted, and for the application to be listed, until 7 April 2016. Mr Justice Holman stated that: “however these difficulties may have arisen; the result is that there has simply been no speedy or urgent response at all in this case to the alleged wrongful removal of this child, now almost 2 years ago.”

Therefore, Mr Justice Holman had clear doubts as to the jurisdiction of the English courts, asserting that: “even assuming provisionally that it has jurisdiction, I could not possibly exercise a discretion to order the immediate return of this child to England and Wales now”, given the length of time the child has not been resident in the UK, and that it is suspected that the child is no longer located in a Hague Convention country. If the application had been brought while it was believed that the child was resident in Portugal, a member to the Hague Convention, there would have been a clear judicial resource available to the father. As Mr Justice Holman stated in his judgment “it is, frankly, deeply regrettable, if the father considered that his child had been in some way wrongfully removed from England, that he did not start up proceedings very promptly at a time when he understood the child to be in Portugal.”

Mr Justice Holman reviewed the case of A v B, Re S (Wardship: Summary Return: Non-Convention County) strategically in his judgment to determine the jurisdiction of the court. This case was factually dissimilar to the present case in that the child was resident in the UK at the time of the application and an order was made for the child’s summary return to the UAE. However, ‘if a child is actually in this country…the court is able to be in possession of good, up-to-date information as to the circumstances of the child,’ and therefore the court is able to reach a suitable decision in the circumstances based on the child’s welfare. By contrast, Mr Justice Holman stated that in the present case “I, frankly, know absolutely nothing whatsoever as to the whereabouts, or living, social or educational circumstances of the child,” as the father had no information as to the child’s current situation, or in fact the child’s living arrangements of the last several years.

The key legal themes that Mr Justice Holman was applying in this case to decide whether a summary order was a suitable option were those isolated by Mrs Justice Pauffley in the above mentioned case:

Given the lack of information the father and the court have as to the child’s present location and well-being, Mr Justice Holman agreed with the themes set out by Mrs Justice Pauffley “one only has to apply some of them to the facts and circumstances of this case to see how it is that I could not possibly make an order today for the summary return of this child from Angola to England.” The court would not be able to objectively analyse which country or lifestyle would be in the best interest of the child when the child has spent over half his life in Portugal and Angola, and the circumstances of his current life are still unknown.

Mrs Justice Pauffley clearly leans on the need for speedy resolution, and a ‘swift’ approach to proceedings with regards to wrongful removal of a child or international abduction. But Mr Justice Holman states, “one could scarcely use the word ‘swift’ in relation to this case, in which the child has already been abroad for almost two years,” spending almost the same amount of time abroad as he was resident in the UK. “So it seems to me that…the factors all strongly point away from, rather than towards, any order for summary return.”

It is a sad set of circumstances that means a father hasn’t seen his son in over two years, and has limited judicial routes to follow to be able to see his son. The judge stated that “he must have a great sense of desperation. I do not know anything about his means, but it may well be that it would be extremely difficult, if not impossible, for him to pursue proceedings in Angola. That has to be balanced by the consideration that it may be no less difficult for the mother to defend proceedings here.”

Mr Justice Holman concluded that “all I am prepared to do today, and this frankly is stretching the limits of my power and jurisdiction to the utmost, is require the mother, within six weeks of service of an order upon her by email, to serve upon the father’s solicitors, by email, a statement signed by herself which describes the current living, social and educational circumstances of the child.” The order is to be emailed to the mother in Angola, but there is no guarantee that she will comply with it, and equally no suitable judicial means to enforce it.

Parents in Germany find themselves in Cuckoo land
This site uses cookies. Find out more. Continued use of this site is deemed as consent.   CLOSE ✖