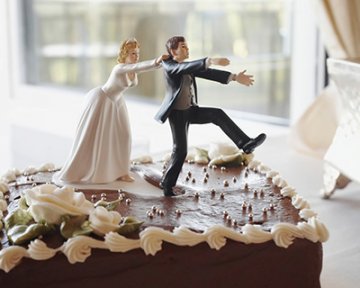 Divorce parties have been en vogue for a few years now. Parting couples are increasingly rejecting the notion that divorce represents failure - choosing instead to honour the end of their marriage as the beginning of something new. Cynics may argue that such celebrations suggest bitterness or narcissism on the part of the host(s) but, for many, they are integral to abolishing the social stigma that still lingers around divorce.

Following the proliferation of post-divorce selfies in 2015, the latest trend to sweep across the Atlantic and into the clutches (and stomachs) of British divorcees is the divorce cake. As the Daily Mail reports, photographs of cakes bearing tongue-in-cheek, faux-aggressive messages directed at ex-spouses or depicting fondant brides burying their grooms in sugary graves have “flooded” social media of late.

So, do these confections represent an empowering declaration of freedom, or are they in poor taste? The cakes themselves may be irreverent but, along with divorce selfies and parties, they are demonstrative of the psychological need to symbolically acknowledge a major life event. One feature in The New York Times seems to agree with this interpretation, exploring the notion that divorce celebrations are a type of cultural ritual, in the same vein as weddings and funerals. The article quotes New Jersey-based family therapist Risa Marlen, who sees a certain symmetry in such ceremonies: “A marriage begins with ritual and ceremony, and it should end that way,” she says, “The human psyche needs that closure. It warrants it. It deserves it.”

It’s not only those who have gone through acrimonious separations plumping for divorce parties. Some ex-couples throw joint divorce parties as a bittersweet celebration of both their union and the new lives that await them. This trend has been popularised by those in the public eye, such as The White Stripes frontman Jack White. He and ex-wife Karen Elson reportedly celebrated their impending divorce with a party, that White explained as a way to “re-affirm our friendship and celebrate the past and future with close friends and family.”

Whilst explicitly celebrating the end of a marriage is a rather secular phenomenon, some religions do have their own divorce customs. Unitarian Universalists, for instance, may undergo a “ceremony of hope” where congregants assemble “to bear witness to the couple’s desire to begin anew”. Then there’s the Mantokuji Soto Zen temple in Japan, which allows women who wish to sever their marital ties to rid themselves of “bad karma” by dropping their break-up wishes into a purpose-built toilet.

So, it seems, there are a myriad of ways for divorcees to commemorate their separation. Yet, for the most part, they stem from the same impulses: to evoke catharsis, release feelings of pain and anger, and welcome new beginnings.

Modern family values clash for Elton John and Dolce & Gabbana
This site uses cookies. Find out more. Continued use of this site is deemed as consent.   CLOSE ✖