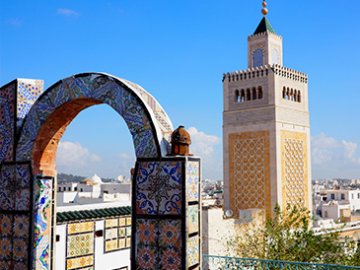 The family of a British woman who travelled to Tunisia in order to attend a court hearing regarding her divorce from a Tunisian national have grown increasingly concerned about her whereabouts, after she failed to return home as planned.

Mrs Melissa Everest from Lancing, West Sussex flew to Tunis on 6 July 2016 to attend divorce proceedings and was due to return to the UK on 14 July, after the case was adjourned to a later date. Via a Facebook post, Mrs Everest’s sister Heidi Everest-Gourlay stated that no one in the family had heard directly from Mrs Everest since the day before her scheduled departure and have grown increasingly concerned about her welfare.

According to the Daily Mail, Mrs Everest, who has two minor children from a previous relationship, met her estranged husband Adem Brins Harrabi during a summer holiday in 2014, “after going through a divorce”. They married in Tunisia the following year but the relationship soon broke down.

Despite the family’s concerns, Sussex Police announced that, “following inquiries via the National Crime Agency and the Foreign Office,” the Tunisian Police have found Mrs Everest who “confirmed to them that she was in Tunisia of her own free will”.

A police spokesperson stated that “The family have been told this. But her family say they will not accept she is safe until they have heard from her directly.”

Indeed, Mrs Everest-Gourlay describes her sister’s behaviour as “completely out of character”, doubting the veracity of Mr Harrabi’s statement to the Press Association that “She is well, and she is OK. Nothing has happened to her.” The Argus now reports that Mrs Everest told her family If I’m not back by Thursday, call the police.” Her sister has stated that believes “she has been manipulated, or coerced, or held against her will”. The family also indicated that they do not trust the official account provided by Tunisian Police, as “We know Adem’s dad is chief of police.” Unhappy with the perceived lack of support from Sussex Police, Mrs Everest’s mother has now turned her attention to the Foreign Office, in the hope that direct contact with her daughter can be facilitated.

Divorce and similar stressors are not causes of breast cancer, study reveals

Former millionaire whose ex-wife received 90% of the matrimonial assets requests 'clean break'
This site uses cookies. Find out more. Continued use of this site is deemed as consent.   CLOSE ✖