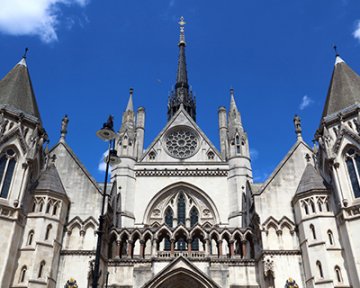 An Irishwoman, who claims she was ‘tricked into a divorce’, has won a dispute against her estranged millionaire husband.

Iranian businessman, Mehrdad Radseresht, 72, and Barbara Spain-Radseresht, 49, had been involved in a heated disagreement over the validity of their marriage. The judgment was issued by Mr Justice Cohen sitting in the Family Division of the High Court. Here, Mrs Spain-Radseresht claimed she was tricked into signing paperwork in 2009 agreeing to a divorce settlement.

The couple, who met in 1990 and married in Tehran two years later, ran a successful business together. Since marrying, the couple have raised their children whilst living in London, Dubai and California. In 2008, whilst in Dubai, Mr Radseresht hired a private investigator and discovered that his wife was having an affair.

Mrs Spain-Radseresht told the court that upon discovering the affair Mr Radseresht threatened her with ‘house arrest’ and physically abused her. Mrs Spain-Radseresht described the episode as ‘terrifying’, however despite her husband’s behaviour, the couple made the decision to start afresh and move to London.

During High Court proceedings, Mr Radsereht presented a different version of events, claiming that the couple had agreed to divorce at the time with Mrs Spain-Radseresht willingly signing a settlement in Duabi. Whereas it is Mrs Spain-Radsereht’s contention that she was tricked into signing any paperwork that was presented to her. She told the court that it was only when she made her own separate divorce application last year that she became aware of the ‘Dubai Divorce.’ Upon this discovery, Mrs Spain-Radseresht declared the agreement was forged, later telling Mr Justice Cohen that she believed her husband had “tricked” her.

In court, Mrs Spain-Radseresht told Mr Justice Cohen that she had not knowingly signed the document and, at the time, had little idea of what was being presented to her by her husband. It was Mrs Spain-Radseresht’s belief that the divorce settlement had likely been hidden amongst a pile of other documents that she was forced to sign. She further elaborated that her feelings of guilt and her intent to please her husband led her to signing the document. This was confounded further by the pressure he placed on her after finding out about her liaison.

To determine the validity of the divorce, Mr Justice Cohen paid particular attention to the facts of the case. Firstly, the judge examined the language of the supposed divorce settlement from 2009. Upon inspection he concluded that the language used was such that Mrs Spain-Radseresht could not have been reasonably expected to understand.

Furthermore, prior to signing the agreement, Mrs Spain-Radseresht was not given an explanation of the content of the document nor given the opportunity to seek legal advice. Therefore, due to the lack of notice and Mrs Spain-Radseresht’s inability to participate, the divorce could not be legally recognised.

When declaring the divorce invalid, Mr Justice Cohen also acknowledged that the couple had never previously mentioned the notion of a divorce to either their children or friends since 2009. Moreover, hotel bookings and other financial matters made during the period all recognised Mr Radseresht and Mrs Spain-Radseresht as husband and wife. On one particular occasion, emphasised by Mr Justice Cohen, Mr Radseresht even introduced Mrs Spain-Radseresht as his “wife” to the vice-president of Iran.

The judge came to the conclusion that these facts were incompatible with the husband’s claim that the pair had divorced some years prior. In his final assessment, Mr Justice Cohen urged the parties to find an amicable solution to their dispute, ultimately describing the matter as a “financial and emotional disaster” for all parties involved.

"I am sure they both care deeply for their children who have been so affected by these proceedings, and I urge them as strongly as I can to sit down and mediate their remaining differences so they can cease this battle and the whole family can benefit."

Divorce is in your DNA, new research finds
This site uses cookies. Find out more. Continued use of this site is deemed as consent.   CLOSE ✖