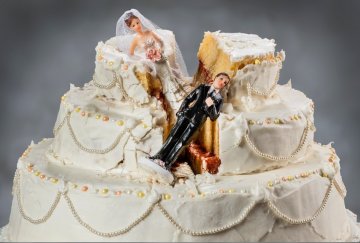 We’re often told that women are more frequently the ones who petition for divorce. There seems to be little arguing with that in the UK – according to the latest ONS divorce statistics (which takes data from 2012), 65% of all divorces were granted to women.

But does this mean that women are always more likely to initiate a relationship break up? Not according to an article in Time magazine, which discusses a recent piece of research presented to the American Sociological Association. This research agrees that women are more likely to end marriages, but that when a heterosexual couple are not married, the likelihood to initiate a breakup is more gender neutral. The US study, bearing the does-what-it-says-on-the-tin title ‘How Couples Meet and Stay Together’, followed 2,262 heterosexual adults aged between 19 to 64 who were either married or in a relationship. The study began in 2009 and ended in 2015.The researchers found that out of the married couples who were divorced by the end of the study, women had initiated 69% of them – so just a touch over the national average in England and Wales. However, among the breakups for unmarried couples, only 56% were initiated by women.In marriages, women rated their happiness levels as being lower than men’s, whereas in non-married couples, the data showed the inverse. So while women have predominantly initiated divorces since as far back as the 1940s, this is a trait that is exclusive to marriage, not heterosexual relationships in general.The conclusions that have been drawn from this by the study’s leader, Professor Michael Rosenfeld of Standford University, indicate that the patriarchal baggage that comes with marriage is still going strong. He stated:

I think that marriage as an institution has been a little bit slow to catch up with expectations for gender equality. Wives still take their husbands’ surnames, and are sometimes pressured to do so. Husbands still expect their wives to do the bulk of the housework and the bulk of the childcare. On the other hand, I think that non-marital relationships lack the historical baggage and expectations of marriage, which makes the non-marital relationships more flexible and therefore more adaptable to modern expectations, including women’s expectations for more gender equality.

Even the Daily Mail is convinced, suggesting that husbands should “pull their weight” domestically if they want to avoid divorce. And, considering that the same paper also published a piece on the Georgia State University research that suggests that heterosexual couples enjoy better sex lives if the man takes on an equal share of childcare. Ayesha Vardag agrees that married women often initiate divorce, but she isn’t convinced that housework per se is the cause of marital tension:

In our experience at Vardags, it’s almost always women who push the button on a divorce. If a man starts the divorce you can usually be pretty sure there’s another woman in the background who’s given him an ultimatum. I don’t find it’s about housework. My experience is: men, with the traditional freedom of working outside the home, will try to have their cake and eat it for as long as possible – why get out permanently and jeopardise your infrastructure with your wife and kids at home when you can go out to play whenever you like? Especially with the old (incorrect) idea that women keep the kids. Whereas women tend have been brought up to feel more romantically and to want the whole existential soul-mate package from one partner and bail when that goes awry.

So even if it’s less about who does the dishes than the Daily Mail might have us believe, there’s clearly very much a kernel of truth about gender expectations and the influence it can have on married couples’ attitudes and behaviour. Things could be shifting, however. Ayesha says:

As women increasingly go out to work and have their own independent lives outside the home, they’re freer too. I think you’ll find there will be more women having affairs and still choosing to keep their marriages together, not least because if they don’t they can increasingly expect the kids to share their time equally between their parents.

It may be that if men shrug off a bit of their freedom and knuckle down to some dusting, while women embrace their social and economic liberty a bit more, we could be on the way to concocting the recipe for the perfect marriage.
“Ayesha Vardag - Britain’s top divorce lawyer.”

When family law overlaps with professional regulation
This site uses cookies. Find out more. Continued use of this site is deemed as consent.   CLOSE ✖