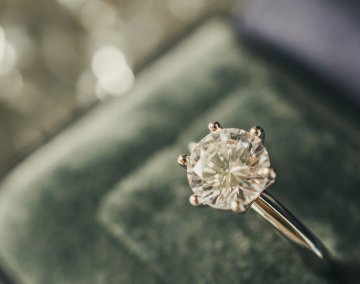 Family law, like civil law, is subject to the overriding objective. This means that judges have to ensure that, as far as is practicable, matters are dealt with expeditiously and fairly and in a way that is proportionate to the nature, importance and complexity of the issues. Yet retired divorcee Judith Saunders has spent five years and, she claims, £100,000 fighting for the return of a 22 carat gold wedding ring, a pair of diamond and sapphire earrings, another set of earrings and a designer pearl necklace worth in the region of £7,000.

When Mrs Saunders married her husband, Mr Trevor Unwin, in 1970, he was unemployed and relied on Mrs Saunders to support him which included the purchase of their wedding bands. Over the 37 years of the marriage, Mr Unwin built up a successful career, and upon separation in 2004, the matrimonial pot was said to be in the region of £1.5 million. In 2004, the parties signed an agreement dividing the matrimonial wealth equally, leaving Mrs Saunders with two properties in Sussex worth in the region of £500,000. Having reached agreement on the main items, it might have been expected that the two parties would go their separate ways and attempt to rebuild their lives. In fact, Mrs Saunders has pursued her ex-husband through the courts for the return of the jewellery.

Jewellery is often one of the hardest assets to deal with upon the breakdown of a marriage. This is due to the emotional significance placed on items of jewellery, the difficulty in valuing the jewellery, and the complexity involved in determining who is entitled to it. A prime example, as in this case, is the wedding or engagement ring. Typically this will have been a gift, and so will be the sole property of the person to whom they were given (if the marriage took place). However, the problem arises where the ring is a family heirloom and the husband claims that the ancestral diamond was simply ’on loan’ to the wife. The same can be said where the jewellery is given as a gift during the marriage, and upon the breakdown of the marriage there is not enough money to cover both parties’ needs.

Any jewellery purchased from matrimonial assets, even if given as a gift, could be considered to be a matrimonial asset. Suppose that instead of a diamond ring, one party purchased the other party a house, this would undoubtedly be included in the matrimonial pot and divided accordingly. So why not a ring?

The answer is twofold:

Mrs Saunders appealed the family judge’s decision of November 2012, which dismissed her application for the return of the jewellery as “irrational, perverse and bizarre”. Lady Justice Gloster rejected the appeal on the basis that Mrs Saunders “did not have enough ammunition to overturn the decision” and that she “would be doing her no service by allowing this appeal to proceed”.

Such comments seem to be prudent. While it is undeniably hard to let go of the past, perhaps this tale of woe can serve as a lesson to divorcees to move on with their lives, rather than to spend hundreds of thousands of pounds on what might best be described as ’grudge litigation’.

When it comes to divorce, who gets the family pet?
This site uses cookies. Find out more. Continued use of this site is deemed as consent.   CLOSE ✖