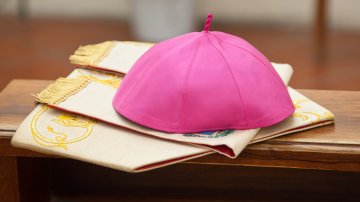 ’The Church is called to carry out her mission in fidelity, truth and love’.

Sunday 4 October 2015 marked the start of the three-week Catholic Synod on family.

Anticipated to be a defining moment for Pope Francis, the synod will bring Church leaders together to discuss current issues and the Church teachings on family.

The synod is expected to cover:

The homily, delivered by Pope Francis on 4 October 2015, was nothing if not emotive when speaking of the desire for each person to be loved, and loved in return:

"People today – who often ridicule this plan – continue to be attracted and fascinated by every authentic love, by every steadfast love, by every fruitful love, by every faithful and enduring love. We see people chase after fleeting loves while dreaming of true love; they chase after carnal pleasures but desire total self-giving."

While this synod brings together many members of the church to speak on issues pertinent to the family, Pope Francis has been outspoken in his views on the family in modern society. He has confronted homosexuality throughout his papacy.

After his election in 2013, Pope Francis reaffirmed the Roman Catholic Church’s position that homosexual acts were sinful, but said homosexual orientation was not. In his visit to the US last week, the Pope had a private meeting with a gay former student of his, and his boyfriend, at the Vatican mission in Washington. The Pope also met Kim Davis, a local official from Kentucky, who recently garnered attention for refusing to issue marriage licences to same-sex couples.

What can we expect?

’To carry out her mission in truth, which is not changed by passing fads or popular opinions’.

It is expected that a battle between conservatives and progressives is likely as the Church debates how it should approach the modern world without veering away from doctrine.

So far as the Church’s treatment of homosexuality is concerned, it is worrying that on the eve of the synod, the Vatican fired a priest after he revealed that he was in a homosexual relationship. It may also be telling that, throughout the homily, references to unions and love were to a man and woman as opposed to ’people’. The homily touched on the importance of the family as ’God’s dream for his beloved creation: to see it fulfilled in the loving union between a man and a woman’.

Austin Ivereigh, the author of a biography of Pope Francis, told The Guardian that the synod will be looking at ’how the church can better walk alongside people’. On cohabitation, he said that this approach may not mean ’accepting that cohabitation is right. But it might be accepting that it is a stage to marriage’.

Ivereigh has suggested that Francis is looking for church leaders to adopt a more ’pastoral approach’ stating that, ’A Christianity which does little in practice, while incessantly explaining its teachings, is dangerously unbalanced’.

While Pope Francis has recently pledged to make the annulment process simpler and less bureaucratic, it’s noteworthy that there is nothing yet on divorce, except that the Church should be more welcoming to remarried Catholics. It will fall to Pope Francis to decide what, if anything, changes in relation to the teaching in the Church doctrine.

We will report on the outcome of the synod in three weeks.

Committal: a reminder on the importance of compliance
This site uses cookies. Find out more. Continued use of this site is deemed as consent.   CLOSE ✖